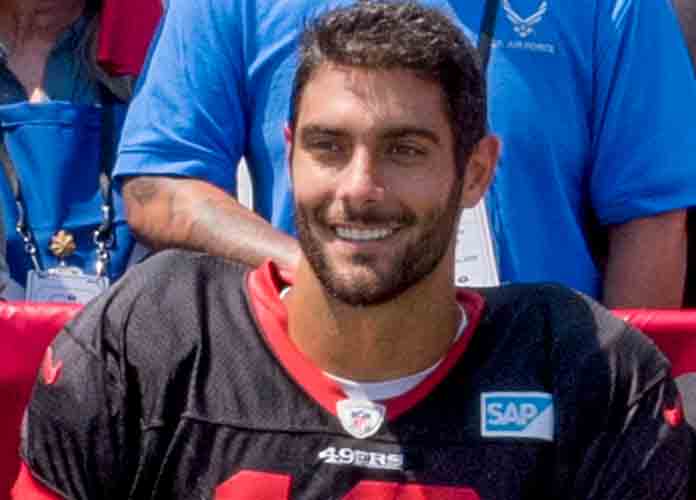 San Francisco 49ers quarterback Jimmy Garoppolo had a rough return to the football field on Monday night, to say the last, as he posted a 0.0 passer rating in a 24-15 win over the Broncos in Denver.

Garoppolo, 27, finished 1-for-6 for zero yards and an interception Monday evening in his first appearance since he sustained a season-ending knee injury at the beginning of last season.

“Obviously [I’m] a little frustrated,” Garoppolo said following the game, per ESPN. “But it’s the NFL, unfortunately we don’t get to play the whole game. … You wish you could be out there for more so you could bounce back. … It is what it is. It’s the preseason right now, so you just gotta take it in stride.”

The former New England Patriots QB had his first four passes knocked down at the line, intercepted by Isaac Yiadom, tipped and broken up by Broncos cornerback De’Vante Bausby for a near pick-six, in that order. One of Garoppolo’s passes was even 4.8 yards behind the line of scrimmage.

Garoppolo, whom the Patriots drafted as a second-round pick in 2014, spent four seasons in New England before being traded to the 49ers in 2017. Last year, Garoppolo inked a five-year, $137 million contract with San Francisco before tearing his ACL in Week 3.

NFL fans and pundits were quick to mock the QB on Twitter for his poor performance. Some noted that Garoppolo’s struggles have been going on since training camp this summer. In a practice last week, Garoppolo threw five consecutive interceptions. Other fans and reporters also pointed out the fact that the QB had a 96.2 passer rating in his first six games with the Niners in 2017, a mark equal to the one his predecessor Colin Kaepernick had during his final six contests with the franchise in 2016. Unlike Garoppolo, Kaepernick did not sign a major contract extension with the 49ers after he drew controversy for his national anthem protests.

This feels like a good time for this little reminder: Colin Kaepernick’s 96.2 passer rating in his last 6 games of the 2016 season was the same as Jimmy Garoppolo’s in his 6 games of the 2017 season; Garoppolo signed a record 5-year, $137.5 million contract the following February

Me talking to San Francisco 49’er fans after watching QB Jimmy Garoppolo go 1 for 6 with 0 yards an INT and a perfect ZERO passer rating in last nights game vs the Denver Broncos:#NFL pic.twitter.com/ZaN8nVqFwC

Me and Jimmy Garoppolo had the same QB rating last night… pic.twitter.com/IZHq0OlFys

The 49ers will next play at the Kansas City Chiefs on Saturday and then host the Los Angeles Chargers on August 29 for their final preseason matchup.

Watch highlights — or lowlights, really — of the 49ers vs. Broncos game here.