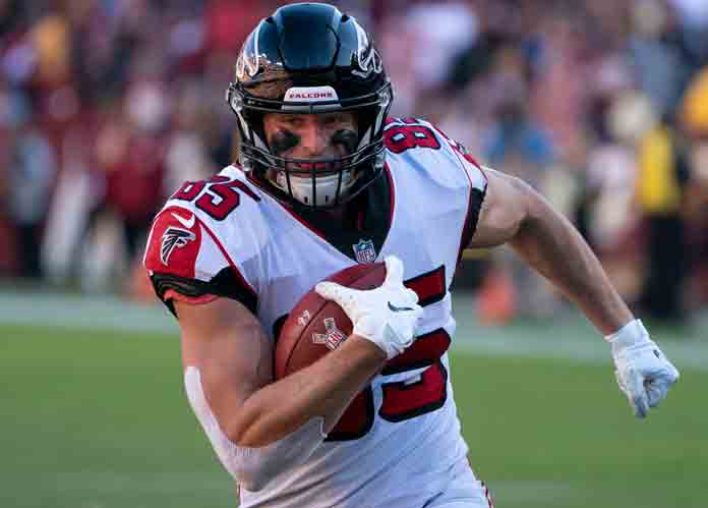 Eric Saubert of the Atlanta Falcons carries the ball at FedEx Field in 2018. (Keith Allison/Wikipedia)

Saubert, a 25-year-old 2017 fifth-round pick, is a 6-foot-5, 253-pound tight end who played all 16 regular-season games with Atlanta last season, his second with the team. He compiled five catches for 48 yards and also served as a utility man.

The reigning Super Bowl champion Patriots — who are now missing retired tight end Rob Gronkowski — are set to add more depth to their tight end chart thanks to Saubert. New England’s roster at the position already includes veterans Lance Kendricks and Benjamin Watson, second-year player Ryan Izzo and star tight end Matt LaCosse, who sustained an undisclosed leg injury in the Pats’ 31-3 preseason-opening victory over the Detroit Lions last week. Watson has been suspended for the first four games of the 2019 season after violating the league’s substance abuse policy.

During his final college season at Drake, Saubert finished as the second-best tight end after averaging 70.5 receiving yards per game (56 catches for 776 receiving yards). He was known at the time for being a pass and run blocker. Saubert also reportedly caught a touchdown pass from Tom Brady during his first Patriots practice this week.

Immediate introduction: QB Tom Brady to TE Eric Saubert for a TD this morning. While it was in a lighter pace drill, in shorts and light shoulder pads, the Patriots are putting Saubert right into the mix.

Eric Saubert may be the most athletic TE on the #Patriots. There are concerns, which I’ll get into, but I wanna start on a positive note.

Love what he could bring as a special teamer. Really good speed for his size, shows patience and lane discipline, and tackles well in space. pic.twitter.com/NpCr1IhoJH