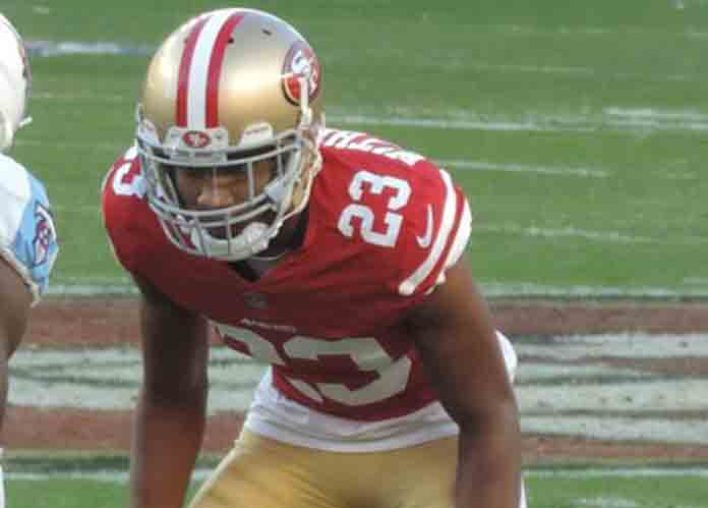 Ahkello Witherspoon with 49ers in 2017 (Chipermc/Wikipedia)

The biggest hit the San Francisco 49ers have experienced this season is to their health. They are 5-0 with nine starters on their injured list.

Joe Staley — the six time Pro-Bowler and three time second team All-Pro offensive tackle — has been the most significant player lost to injury. Staley suffered a fracture left fibula against the Bengals on Sept. 15.

However, the good news is that coach Kyle Shanahan (who gets my vote for Coach of the Year as it stands) said Monday that Staley is close to returning, as is third-year cornerback Ahkello Witherspoon. According to NBC Sports, the Niners said in their latest injury update that Staley could be back as soon as the Week 7 home game against Carolina, while WItherspoon could return to the lineup by the Week 8 matchup at Arizona.

Witherspoon — who has been really good lining up parallel to future Hall of Famer Richard Sherman at CB — went down with a right foot strain against the Steelers on September 22 . Sherman could have been the tenth player on this list of injuries after leaving the game against the Rams early with a right arm injury, but the coach said he would most likely play this week and did not put him on the injured reserve list (with another “honorable mention” that escaped the IR Sunday: K’Waun Williams, who was examined for a hand injury).

Offensive tackle Mike McGlinchey and full back Kyle Juszczyk are out for four to six weeks with significant knee injuries, and the latter requires surgery. This means the pair will return until sometime between the Nov. 11 home game against Seattle or the Dec. 1 matchup at Baltimore.

Meanwhile, wide receivers Trent Taylor and rookie Jalen Hurd show that the injuries do not discriminate between defense or offense. Hurd has not played a snap in the NFL, but was chosen in the third round this year with a lot of promise after a decorated college career. Jason Verrett, Kentavius Street and Garrett Celek round out the list.

Hopefully, the Niners will have two of their main pieces back in time for their game against the surging Carolina Panthers, who have won the last four straight contests against good teams.