New York Riveters' Jenny Scrivens: How To Prepare For A Game, Rebound From A Bad Goal - uSports.org 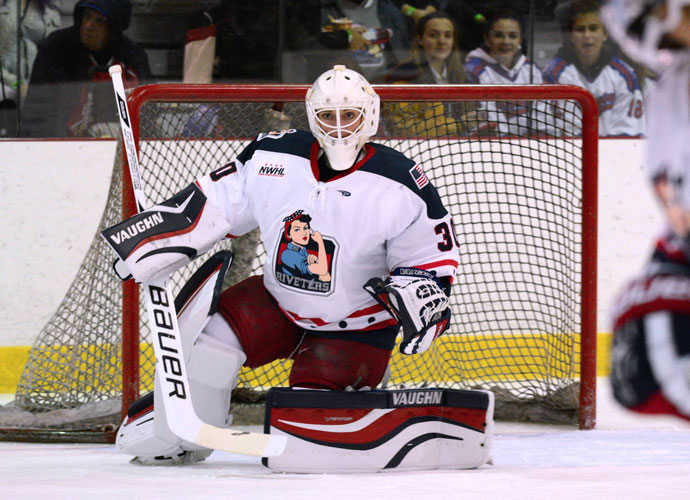 New York Riveters’ Jenny Scrivens: How To Prepare For A Game, Rebound From A Bad Goal

Playing hockey goalie is one of the toughest positions in sports. As legendary netminder Jacques Plante asked, “How would you like it if at your job, every time you made the slightest mistake a little red light went on over your head and 18,000 people stood up and screamed at you?”

Or, as Gump Worsley once said, “The only job worse is a javelin catcher at a track-and-field meet.”

With that in mind, it’s no surprise that goalies often rely on superstition to cope with their stress; many will get dressed in a certain order or touch the goal posts the same way every time they take the ice.

But Jenny Scrivens of the NWHL’s New York Riveters doesn’t have any.

“That’s a myth that I’d really like to dispel. I don’t think we’re all that wacky and that we all have weird superstitions. I know that my husband has come across a few in the NHL with some of his goalie partners or people he’s heard about in the league, but I really try to focus on the things that I can control,” she told uSports. “For me, that means not getting caught up in any superstitions. I do the things that I need to do to prepare myself to play and that’s get enough sleep, eat a good meal and drink enough water. Aside from that, I don’t need to put on my gear a certain way or tap the posts or bar any number of times; that would just drive me out of my mind. I try to keep it as simple as possible.”

Even when she gives up a bad goal–which every goalie will do at one point or another–her key is to move on rather than dwelling on the mistake.

“I just try and shake it off and, I don’t know if I would say that I pretend it didn’t happen, but I try to have a short memory out there and forget about it,” she explained.  “Maybe take a lesson or two from it if there’s something I can do to make a quick adjustment in my game, but I really just shake it off and have confidence in myself and my team that we’re going to get the goal back.”

And, if any young athletes want to don the pads and endure the slings and arrows of goaltending, Scrivens offers this advice:

“I think one of the most important lessons that I try to teach kids—girls or boys, no matter what age, no matter what sport—is to play different sports and get a diverse outlook on not just the one sport you specialize in. Try a few different others and don’t get burned out because I’ve seen it happen. I know it happens in every sport. I think it’s just important to see what else is out there and have fun too. If you’re playing one sport and you’re playing it for five hours every single day, I don’t think it’s going to help you as much as some people think. Just have fun with it.”