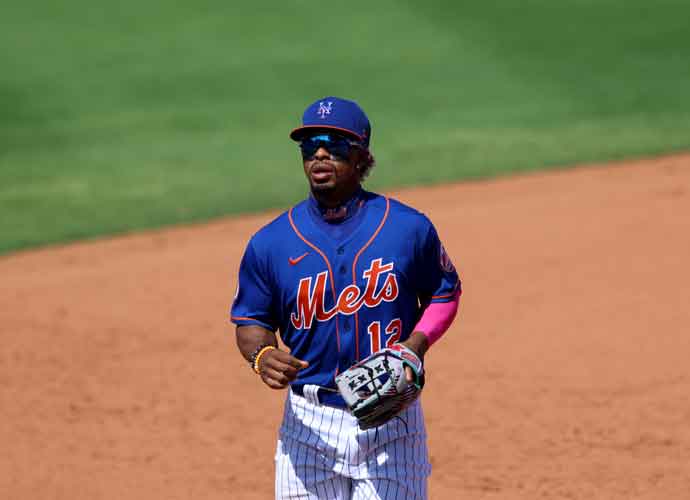 What a whirlwind of emotions the last 48 hours have been for the New York Mets.

In the bottom of the ninth, down 5-1, the Mets scored five runs to defeat the Miami Marlins, capped by a walk-off RBI single to left field by Michael Conforto that drove in Pete Alonso and Javy Báez. The Mets second baseman, who has been a subject of controversy since Sunday’s game against the Washington Nationals, scored the winning run all the way from first after left fielder Jorge Alfaro mishandled the ball before attempting to nail Báez at home. The dramatic victory marks the completion of a game that started on April 11 before being suspended during the first inning.

The win is especially poignant given the context of what unfolded on Sunday. After launching a homer into the second deck in left field, Báez crossed home plate and proceeded to point both thumbs down while glancing at the crowd. When asked during a postgame interview about the gesture, he explained, “When we don’t get success, we’re going to get booed, so they’re going to get booed when we have success.”

“When I strikeout and I get booed, it doesn’t really get to me. But I want to let them know that when we have success, we’re going to do the same thing to let them know how it feels. If we win together, then we’ve got to lose together, and the fans are a big part of it. They’ve got to be better. I play for the fans, and I love the fans. If they’re going to do that, they’re just putting more pressure on the team, and that’s not what we want.”

Javy Baez on the thumbs down sign Mets players have been flashing to the crowd after their hits:

“Mets fans are understandably frustrated over the team’s recent performance. The players and the organization are equally frustrated, but fans at Citi Field have every right to express their own disappointment. Booing is every fan’s right.”

“The Mets will not tolerate any player gesture that is unprofessional in its meaning or is directed in a negative way toward our fans.”

The frustrations expressed by both fans and players are justified. The Mets came into this season with big expectations to win the NL East. And for the most part, everything was alright. The squad was in first place for well over a month and was nine games over .500 as recently as July 28.

However, matters began taking a turn for the worse when star ace Jacob DeGrom suffered forearm inflammation. The Mets ace had gotten off to a scorching start on his way to putting up one of the greatest pitching seasons of all time. In 15 starts this season, he has a microscopic 1.08 ERA and a 13.27 strikeout-to-walk ratio. Unfortunately, Degrom hasn’t pitched since July 7 and has faced a mounting number of setbacks to his recovery.

Disappointments haven’t stopped there. Francisco Lindor, who signed a whopping 10-year, $340 million contract extension with the Mets, has been a massive disappointment this season. He’s currently batting an abysmal .221 in 95 games played. To top it off, Lindor was the other player aside from Baez, who signaled a thumbs-down motion to the crowd.

Arising from this disappointment has been a renewed conversation about the relationship between players and fans in the sports realm. Professional sports make up a fascinating cultural product, as they transcend linguistic and cultural divisions in a world that is heavily fragmented and polarized. Perhaps one of the most unique components of sports is the concept of fandom, whereby one’s personal identity is merged with the team’s identity.

In Michael Serazio‘s book, The Power of Sports: Media and Spectacle in American Culture, he examines the nature of fandom, one defined by a tribal, communal, and emotional connection to the team. “When fans talk about their favorite team, language belies logic – that ‘we’ community of followers (united really only as consumers of a copyrighted cultural product) becomes one and the same, ‘inseparably intertwined,’ with the professionals at play.”

As such, there’s a fascinating dynamic at play in this relationship between the Mets and their fans. Fans believe they are entitled to see their favorite team perform well in exchange for their money and support. Athletes believe fans should be supportive through thick and thin.

As with all relationships, trust is a necessity. While this component was mutually strained for a hot second, Báez has proved he isn’t ready to give up on Queens’ passionate fanbase.