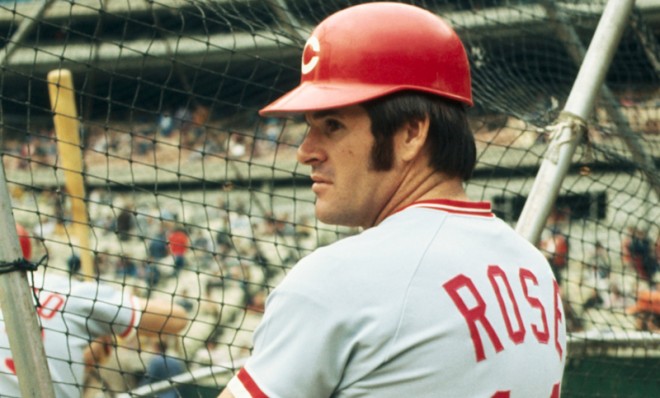 ESPN’s Outside the Lines reports that they have received new evidence that suggest Pete Rose, one of baseball’s greatest players, bet on baseball during his time as a player for the Cincinnati Reds. Although Rose admitted to betting as a manager, which got him banned by Major League Baseball in 1989, he has been adamant about not placing any bets as a player. Rose recently has been applying for reinstatement to new commissioner Rob Manfred and has been a part of MLB on Fox’s studio coverage this season.

A report by @OTLonESPN shows Pete Rose bet extensively on baseball (and the Reds) as a player: https://t.co/MUPErlufv7 pic.twitter.com/2gFO6UGsRC

The new evidence comes from notebooks that were evidence in a raid of New York bookie and former Rose associate Michael Bertolini. The National Archives have held onto the notebooks for 26 years without publicly releasing them. In them, the pages suggest that Rose regularly bet on baseball, including on his own Reds, in his final season of 1986. In fact, each of the 21 legible entries that mention Rose show that he bet on the Reds each time he placed a bet.

The news comes as a big blow towards Rose’s attempts at reinstatement. Proponents of dropping the ban on Rose and making him eligible for the Baseball Hall of Fame point to the fact he had only bet on baseball as a manager and not as a player, which should make his playing days worthy of entering the hall. Other factors like the steroid era, the steadfast opinion of Bud Selig, and the question of whether or not the bets played any role in the Reds’ performance were also thrown around.

But with evidence suggesting that Rose bet on baseball as a player, the possibility that Rose will never be reinstated now grows to a new high. It’s also no doubt that Commissioner Manfield will have a different approach towards considering Rose’s status. Rose’s appearance at the 2015 MLB All-Star Game in Cincinnati is also in doubt with today’s news.

Pete Rose played 26 years in the majors between the Reds, Philadelphia Phillies, and Montreal Expos. He still holds the record for most career hits with 4,256 as well as the number of games played at 3,562. He has been banned from Major League Baseball since the 1989 Dowd Report was released.