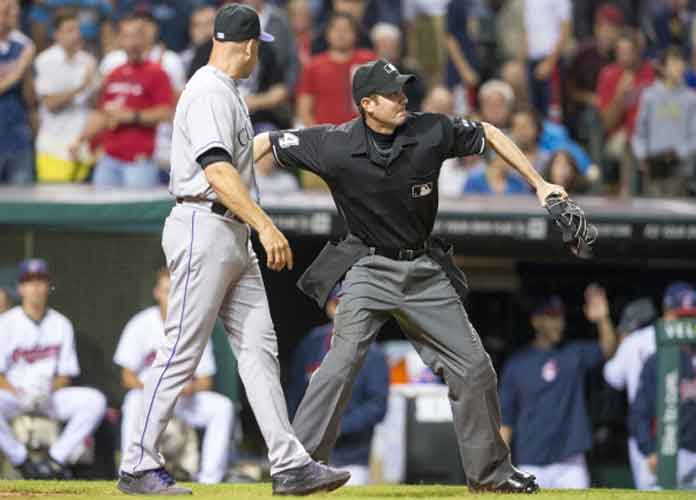 CLEVELAND, OH - MAY 30: Walt Weiss #22 of the Colorado Rockies is ejected by home plate umpire John Tumpane #74 during the sixth inning against the Cleveland Indians at Progressive Field on May 30, 2014 in Cleveland, Ohio.

John Tumpane, MLB Umpire, was in Pittsburgh for the Pirates-Rays Series

Tumpane was headed to his hotel in Pittsburgh after getting lunch at around 2:30pm EST on Wednesday when he spotted a woman climb over the railing of the Roberto Clemente Bridge. The woman told the 34-year-old umpire she simply wanted to take a closer look at the Allegheny River below. However, the expression on her face and tone of her voice led Tumpane to believe she was about to leap to her death.

The umpire reached for the woman, but she told him to let go of her. Eventually, the woman stopped resisting and Tumpane brought her to safety on the other side of the railing thanks to the help of other passersby. He took one of the woman’s arms while another bystander held her other arm. Mike Weinman — an employee of the Tampa Bay Rays — grabbed the woman’s legs and put them on the railing while Tumpane mouthed to a person in the crowd to call the police.

“Figured any way I could help do something,” said Weinman, the Rays’ manager of multimedia production who was making his first road trip in six seasons with the team. “People were trying to tell her, ‘We love you. You’re loved. People want you here. That’s why we’re all here.'”

After a quick 911 call, a police boat scurried up the river named for a Pirates Hall of Famer who died in a plane crash in 1972. The woman was carried to a local hospital with non-life-threatening injuries, per the Pittsburgh Post-Gazette.

Tumpane was very humble when discussing the incident.

“In the right place at the right time,” Tumpane said. “I just happened to be there. I think I’ve been a caring person in my life. I saw somebody in need, and it looked like a situation to obviously insert myself and help out.”

Tumpane was in Pittsburgh to play in the series between the Pirates and the Rays. The umpire called his wife to notify her of the incident before he worked the Pirates’ 6-2 victory over the Rays at PNC Park. Weinman also worked that game.

“It was just pure instinct,” Tumpane said. “You hear kind of stories of this all the time, different scenarios, people aiding and situation where I was lucky enough to be there to help and try to think of everything I could do, hanging on to her. At times she wanted to go the other way. I was like, ‘Not on my watch, please.’ We were just hanging on.”

“Just expresses that importance of being a good person on and off the field and baseball not being the most important thing,” Pirates first baseman Josh Bell said. “Definitely thankful for him to take that initiative. It’s a crazy world out there, a lot going on, but we’re thankful to be able to play the game. Just hope that lady is safe now and she’s in a better spot.”

Tumpane — a Chicago native — started umpiring as a teenager, made his major-league debut in 2012 and received his full-time MLB commission in 2016. Before Wednesday, he did not have any experience in suicide prevention or other type of crisis management.

“It’s also hard when you stand back behind home plate and look and you see the bridge in the distance, In between innings and whatnot, just thinking of how things could have maybe been,” he said. “Glad it was this way.”

CLEVELAND, OH – MAY 30: Walt Weiss #22 of the Colorado Rockies is ejected by home plate umpire John Tumpane #74 during the sixth inning against the Cleveland Indians at Progressive Field on May 30, 2014 in Cleveland, Ohio. (Photo by Jason Miller/Getty Images)
Read more about:
bridge John Tumpane MLB Pittsburgh Pittsburgh Pirates Tampa Bay Rays umpire woman
Listen to the uInterview Podcast!
Get the most-revealing celebrity conversations with the uInterview podcast!