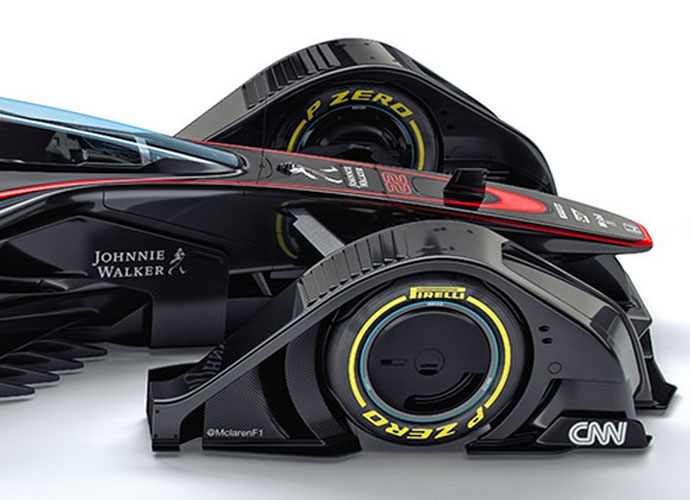 If McLaren has their way, the Formula One’s future will become the present. The British racing team unveiled their MP4-X Formula One Concept Car, which they hope will power them to continued on-track success.

The most noticeable feature of the car is a fighter jet-style cockpit, designed to give drivers increased visibility during a race. To bolster this potential, the car will also be fitted with cameras that feed images directly to the driver’s helmet, allowing him or her to effectively “see through walls.” The system will also provide a heads-up display, alerting the driver to various circumstances, such as debris on the track or the position of the nearest competitor.

Beyond that, the car itself has “thin batteries” and solar energy cells in an attempt to make racing more sustainable. The vehicle is also capably of automatic adjustments to keep the driver safe.

Thanks to wheel-mounted tire sensors, incorrect air pressure will never be an issue. Each sensor is connected to an on-board electronic command unit. That unit in turn works with an pressure regulator to make sure that each wheel is inflated to the right level. This should not only allow for better performances, but also keep dangerous blow-outs and tire delamination to a minimum.

“With the futuristic McLaren MP4-X concept racecar, we wanted to peer into the future and imagine the art of the possible,” said John Allert, Group Brand Director of McLaren Technology Group.

“We have combined a number of F1’s key ingredients – speed, excitement and performance, with the sport’s emerging narratives – such as enclosed cockpits to enhance driver safety, and hybrid power technologies. Formula 1 is the ultimate gladiatorial sport, and the future we envisage will be a high tech, high performance showcase that excites fans like no other sport.”

While it is only a concept, cars like the MP4-X can provide hope for what Formula One’s future might bring.

Introducing the #McLarenMP4X, feeding your #F1 imagination. Explore a vision of the future: https://t.co/zmb6ceA5IG pic.twitter.com/dfRQ2VVo27

Read more about:
Formula One McLaren