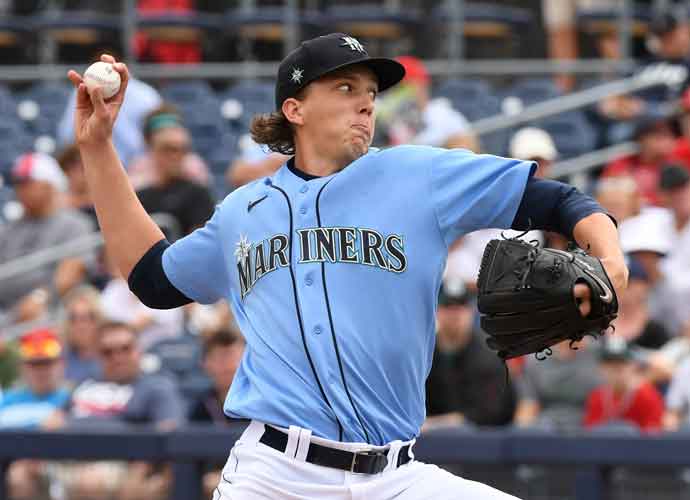 PEORIA, ARIZONA - MARCH 10: : Logan Gilbert #86 of the Seattle Mariners delivers a pitch against the Los Angeles Angels during a spring training game at Peoria Stadium on March 10, 2020 in Peoria, Arizona. (Photo by Norm Hall/Getty Images)

There have been various disagreements and distrust growing between the MLB and the MLBPA. Areas of disagreement from the players union stem from teams tanking, teams scaling back on their free-agent spending, and manipulating the service time of their top prospects. The collective bargaining agreement expires in December, and negotiations are expected to be difficult.

Service-time manipulation is one of the widespread uses by teams but is difficult to prove. Kris Bryant filed a grievance against the Chicago Cubs for manipulating his service time in 2015. Unfortunately, Bryant lost the case due to a lack of evidence.

Service-time manipulation is a tactic that is openly used by a team to delay a player’s free agency but also delays them of wages. It is not against the rules, so it makes the tactic legal. Speaking more about the tactic, it delays a player’s wages that are owed to them. It is essentially robbing them of money they earned. Not only that, but it affects players with zero service time in the big leagues because 15 days being in the minors pushes players’ free agency back a year.  Multiple teams have done this with their prospects, intentionally not playing them in the majors but having them in the minors to delay their free agency by one more year.

Finding evidence to prove this tactic is hard, but recent comments said by Seattle Mariners president Kevin Mather have provided some clear evidence of the tactic. During an event with the Bellevue Breakfast Rotary Club, Mather indicated the club was not going to call up their top prospects last season for service-time reasons no matter what.

A video had been posted showing the full speech, but it was later removed. The video showed Mather talking about manipulating service-time. “If our major-league team had a COVID outbreak or injuries, and we had to call people up from the taxi squad, we were a little short on players because there was no chance you were going to see these young players at T-Mobile Park,” Mather said. “We weren’t going to put them on the 40-man roster, we weren’t going to start the service-time clock.” The speech continued as the team president remarked, “You would not have seen our young players, our prospects, playing at T-Mobile Park.”

The Mariners president did not finish his comments there but went beyond as he talked about the team’s top pitching prospect, Logan Gilbert. The team president stated, “You won’t see him on April 1, but by mid-April, you will see a young man named Logan Gilbert.” Mather did not stop there either, but continued to talk about another team top prospect, Jarred Kelenic. “We control his major-league career for six years, and after six years he’ll be a free agent,” said Mather on the topic of Kelenic. Mather continued to explain the team’s plan for the prospect, “We’d like for him to get a few more at-bats in the minor leagues, probably at Triple-A for a month, then he will likely be in left field at T-Mobile part of the next six or seven years, then he’ll be a free agent.”

After these comments were revealed, the Seattle president released a statement on Sunday night, apologizing. Mather expressed remorse as his statement read, “there is no excuse for my behavior, and I take full responsibility for my terrible lapse in judgment.”