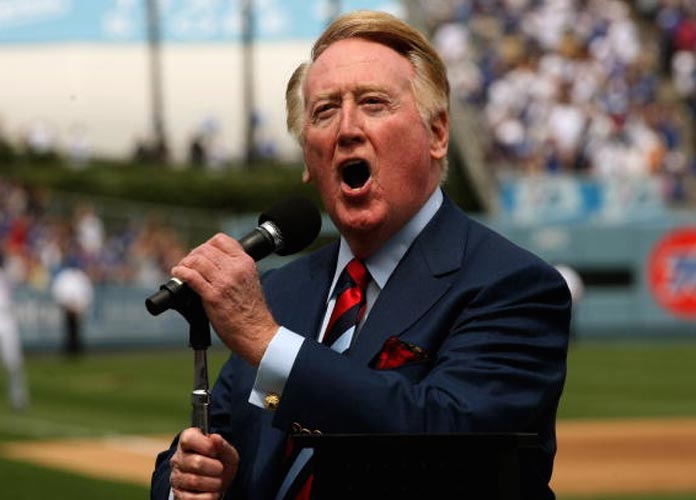 Legendary Los Angeles Dodger broadcaster and announcer Vin Scully passed away on Tuesday night according to the team. The man which had captivated and entertained fans for over 67 years passed away in his home Tuesday night.

In a statement, Dodgers CEO Stan Kasten lamented the loss of the Hall of Famer. “We have lost an icon,” he said. “Vin Scully was one of the greatest voices in all of sports. He was a giant of a man, not only as a broadcaster but as a humanitarian. He loved people. He loved life. He loved baseball and the Dodgers. And he loved his family. His voice will always be heard and etched in all of our minds forever. I know he was looking forward to joining the love of his life, Sandi. Our thoughts and prayers go out to his family during this very difficult time. Vin will be truly missed.”

There will never be another Vin Scully. You will be forever missed. 🎙💙 pic.twitter.com/WyTmXsati5

Scully had been a stalwart in the Dodgers organization even in their Brooklyn days, being the longest-tenured broadcaster with a single team in pro-sports history. He had seen Dodgers legends in the past from Jackie Robinson in the 1950s and Sandy Koufax in the 1960s to future Dodgers legends such as Clayton Kershaw and Yasiel Puig.

Kershaw paid homage to the late Scully after Tuesday night’s matchup against the Giants. “He was the best there ever was,” Kershaw said. “Just when you think about the Dodgers, there’s a lot of history here and a lot of people that have come through. It’s just a storied franchise all the way around. But it almost starts with Vin, honestly. Just such a special man. I’m grateful and thankful I got to know him as well as I did.”

You gave me my Wild Horse name. You gave me love. You hugged me like a father. I will never forget you, my heart is broken. My hand over your family’s hearts.
Los Angeles, I am sorry I am not there with you today to cry together. @TheVinScully @Dodgers pic.twitter.com/OgazZYQ8pU

Scully’s last game was in October 2016 when he was honored after a 9-6 Dodgers victory over the San Fransisco Giants. “God has been so good to me to allow me to do what I’m doing,” Scully said before retiring. “A childhood dream that came to pass and then giving me 67 years to enjoy every minute of it. That’s a pretty large Thanksgiving Day for me.”

“I just want to be remembered as a good man, an honest man, and one who lived up to his own beliefs,” he said.