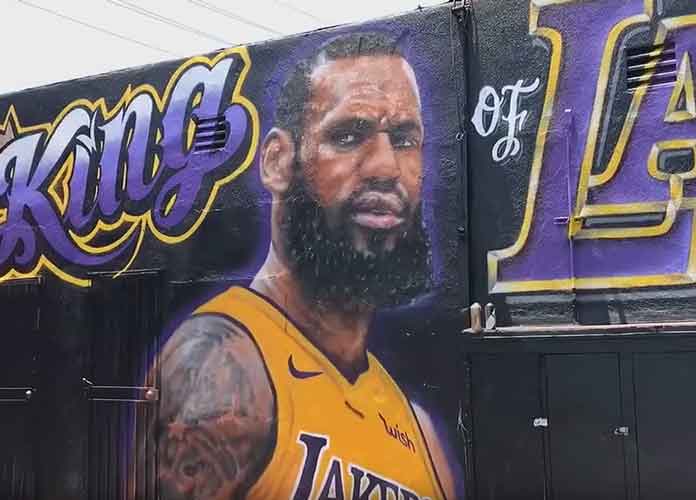 LeBron James mural in LA is vandalized and repainted

Another magnificent performance for Lakers forward Lebron James concluded with a gaudy stat line, a runaway win against the Portland Trailblazers, and an ascension to fifth all-time in NBA scoring history.

“It’s all about hard work,” said James, beaming after dropping 44 points on the Blazers and passing Wilt Chamberlain on the all-time scoring list with 31,425 total points. “When I’m able to do what I love to do, do it at this level, even being mentioned with the greats who have played this game — it just always brings me back to my home town of Akron,” James said after his legendary night.  “And knowing where I’ve come from, knowing how hard it was to get to this point, it’s just never being in satisfied mode.”

Just as the first few chapters of his career transcribed dramatically, the points that hoisted him amongst the hallowed company of Michael Jordan, Kobe Bryant, Karl Malone, and Kareem Abdul-Jabbar came off of a commanding and-one in a prime matchup. Atop a superb list of sporting legends, James now trails His Airness by just 867 points, and 2,218 points behind the Mamba for third all time.

👑 @KingJames walking off with 3️⃣1️⃣,4️⃣2️⃣5️⃣points and the 5th spot on the @NBA all-time scoring list! pic.twitter.com/FzXtV4R9lp

LeBron went off dropping 44 points, 10 rebounds, and 9 assists in a W against the Blazers. Bron passed Wilt for 5th all-time in the NBA’s scoring list. 🙌 pic.twitter.com/gLlNzToMg1

Teammates of the King revered in his legendary aura, taking to social media to adorn their veteran leader. Forward Brandon Ingram couldn’t find the words to appraise the magnitude of his elder statesman, using only emojis in a post of James in the Lakers’ alternative uniforms.

Kyle Kuzma also had a short declaration of praise for the new addition to the league’s greatest names.

Lakers team president and NBA legend Magic Johnson also congratulated the player he recruited this past offseason with grace.

The Lakers’ next game isn’t until Saturday night against the Magic. The team will get some time to commemorate James’ impressive career milestone and rest ahead of a road trip beginning in Orlando.