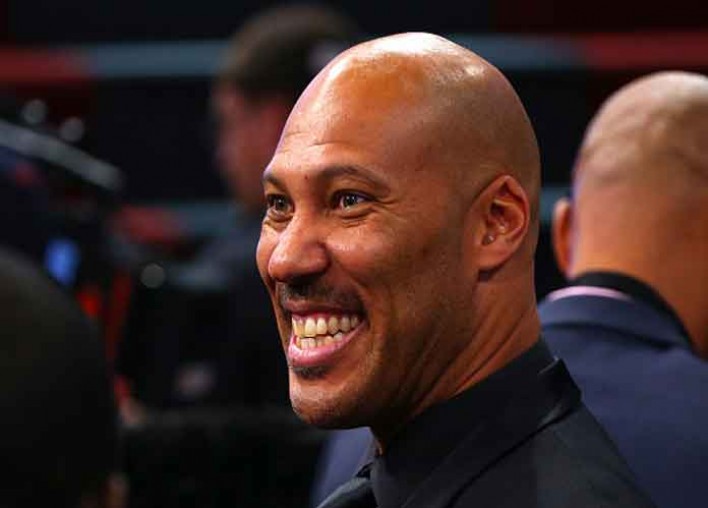 With Father’s Day just around the corner, checking in once again with basketball’s most charismatic father felt like an all but too mandatory affair to dismiss. During Tuesday’s early hours, LaVar Ball joined multiple Fox Sports One telecasts to express his opinions amid the continuous turnover within the Los Angeles Lakers organization.

Alongside Shannon Sharpe, Skip Bayless, Jason Whitlock and Marcellus Wiley, Ball offered input detailing GM Magic Johnson, new GM Rob Pelinka, and owner Jeanie Buss, all of which displayed the trio as a flawed assembly, adding to the already mountainous pile of stories that already do the same.

Throughout his always entertaining dialogue, which during past events even included one–one–one blacktop basketball challenges against LeBron James, Michael Jordan and Ice Cube, Ball expressed his ongoing distrust during his encounters with Lakers front office members. Most notably, Ball mentioned a discussion between Johnson and Pelinka where the two led Ball to believe a roster spot stood accessible for his second son, LiAngelo Ball. This potential deal would have allied two Ball children, teaming them up in the purple and gold.

Ball illustrated the unfulfilled promise as he stated, “Yes Magic and Rob Pelinka did behind closed doors” once asked whether or not the two executives declared their original intentions to sign LiAngelo. Ball later included his surprise after last year’s offseason plans failed to include LiAngelo as he mentioned, “One of the things they told me is, ‘We keep family together.’ Now if you want Lonzo [Ball] to lead this team, why don’t you get a piece that works well with him which is his brother? You gotta get ‘Gelo [LiAngelo Ball] first. You at least got to give him a chance to play with Lonzo. You should have at least got him in Summer League. I thought they were going to take him with the last pick.”

During his afternoon shift, Ball’s slam dunk on the Los Angeles front office continued. Ball held little back during a rant, which included numerous jabs at Buss. Since acquiring the Lakers, scrutiny such as this stands as no stranger to Buss, as the media often criticizes her team involvement, decisions and overall rights to the team.  Although Ball exerted cautious respect for his son’s employer, he stuck to his remarks, clearly establishing his negative feelings for Buss by calling her “sensitive” and agreeing with the view that she makes emotional decisions.

Once moving on from announcing his disappointment regarding the Lakers’ front office, Ball visited the familiar topic of his oldest son’s current status as a Laker. As expected, Ball spoke favorably when analyzing his son. Ball first disclosed any story reporting a possible trade involving Lonzo, as he stated, “The Lakers won’t trade Lonzo, he’s marketable. You don’t have to worry about him about him being in trouble. He doesn’t do any drugs.” He later claimed Lonzo’s play style resembles James’, contributing to multiple reasons as to why a James departure from Los Angeles remains preposterous.

“Lonzo and LeBron have the same type of game. That’s why they were the first ones to have a triple-double in a long time. Their IQs are very high. LeBron doesn’t have to mentor Lonzo. They just have to win together. … Lonzo will be ready for training camp.” — @Lavarbigballer pic.twitter.com/JxQv7mWw9b

Despite his clear connections to the Lakers, Ball holds no effective decision-making powers. However, Ball included his blueprint to fix the troublesome Lakers, which curiously included reuniting James with pending free–agent point guard Kyrie Irivng and also finally fulfilling the promise to make LiAngelo Ball a Laker. While Ball remains a somewhat comical character within the NBA universe, his former statements and predictions regarding Luke Walton and Johnson now appear logical rather than radical, as both find themselves unemployed. With an entertaining offseason ahead, we’ll soon find out if Ball indeed is onto something.