Junior Seau's Family Deny That They Were Told They Could Not Speak During The Hall Of Fame - uSports.org 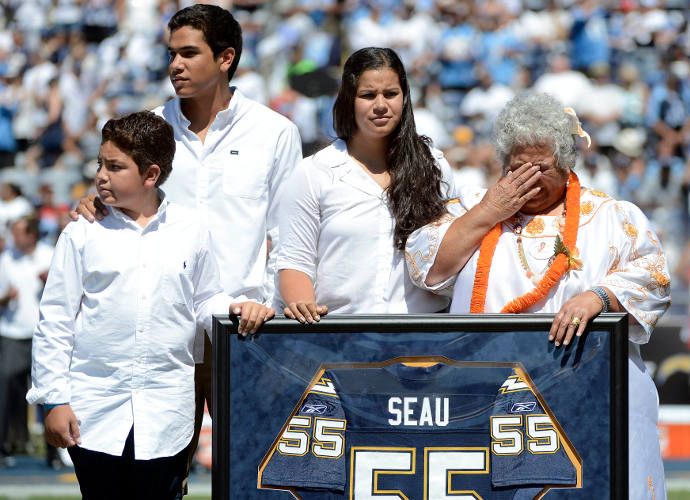 SAN DIEGO, CA - SEPTEMBER 16: The family of Linebacker Junior Seau #55 of the San Diego Chargers celebrate the life of their son and retire his jersey before the game against the Tennessee Titans on September 16, 2012 at Qualcomm Stadium in San Diego, California. (Photo by Donald Miralle/Getty Images) *** Local Caption ***

The family of the late Junior Seau, a former NFL linebacker who committed suicide in 2012, denied recently that they were in full support of the Pro Football Hall of Fame’s policy that prevented the family members of deceased players from speaking at the induction ceremony on their behalf.

The Seau family’s attorney, Megan Donohue, elaborates the fact that the Seau family denies the notion that representatives of the Pro Football Hall of Fame told them that the family would not have the opportunity to speak during the ceremony.

“The Seau family appreciates the overwhelming support for Sydney Seau to be able to accept Junior’s induction into the Hall of Fame live and in her own words. Unfortunately, the Hall of Fame is unwilling to reverse its decision despite communicating to the family earlier this year that Sydney would be able to speak at the ceremony. Contrary to the most recent statement by the Hall of Fame, the family does not support the current policy that prevents family members from delivering live remarks on behalf of deceased inductees. However, the Seau family does not want this issue to become a distraction to Junior’s accomplishments and legacy or those of the other inductees.”

In response to this accusation, David Baker, the president of the Pro Football Hall of Fame posted a letter to fans on Saturday stating: “The Hall has been in positive communication with Sydney, her mother, and the executor of Junior’s estate, who each have communicated to us that they understand and fully support the Hall’s policy.”

The problem in the Seau family’s case is exacerbated because the policy is walking along strained tensions in lieu of Sheu’s suicide at 42. An autopsy revealed that he had chronic traumatic encephalopathy, a neurodegenerative disease that is prevalent amongst pro football players.