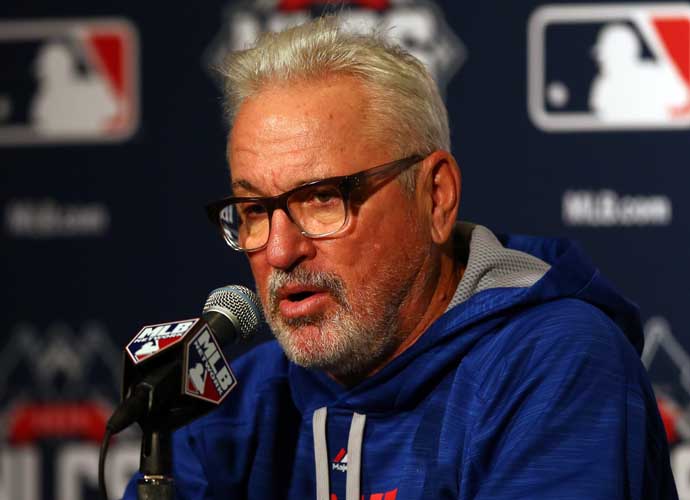 CHICAGO, IL - OCTOBER 20: Joe Maddon #70 of the Chicago Cubs speaks during a press conference prior to game three of the 2015 MLB National League Championship Series between the Chicago Cubs and the New York Mets at Wrigley Field on October 20, 2015 in Chicago, Illinois. (Photo by Elsa/Getty Images)

The Los Angeles Angels of Anaheim have decided that enough is enough as they relieved Joe Maddon of his managerial duties on Tuesday evening. This comes after the Angels experienced a 12-game losing streak which is their longest single-season losing streak in franchise history.

The Angels have entered this season with high hopes and were coasting on high success for a good portion of the early season. They started the 21-11 before this recent skid with one of the better offenses in baseball, despite injuries to essential players and inconsistent with the lineup. However that all changed suddenly at the end of May.

One of the more solid defenses in baseball started giving up about 6.4 runs per contest in their last 13 games, the lowest in the league in that stretch and put up embarrassing performances such as a 9-1 loss to the New York Yankees on May 31 and a 10-0 loss to the Philadelphia Phillies on June 3. Their +47 run differential that they sustained through the first 32 games of the season has completely flipped around with the team sporting a -37 differential in their last 24 matchups. On May 15, they were projected to make the playoffs with an 81.4 percent chance, odds that have dropped to 29.9 percent as of today,

Column: In firing Joe Maddon, Angels GM Perry Minasian has put all the pressure on himself

If Shohei Ohtani heads into free agency with his Angels tenure defined by five managers and zero postseason appearances, well, it’s been fun while it lasted.https://t.co/twHPIu24xw

Maddon himself said that his firing was surprising, speaking to Ken Rosenthal, he said, “A little bit. Actually, a lot. You always rely on the people in charge to read the tea leaves properly. This time, they did not. You didn’t even have to ask me. You can ask any of the players or coaches. They’re the ones who really know. Perry was in a tough spot. I understand that. Let me just put it that way. I would really rely on the sentiments of the coaches and the players.” Maddon also said he would like to continue managing.

The Angels will try to get back on track as third base coach Phil Kevin will serve as interim manager.