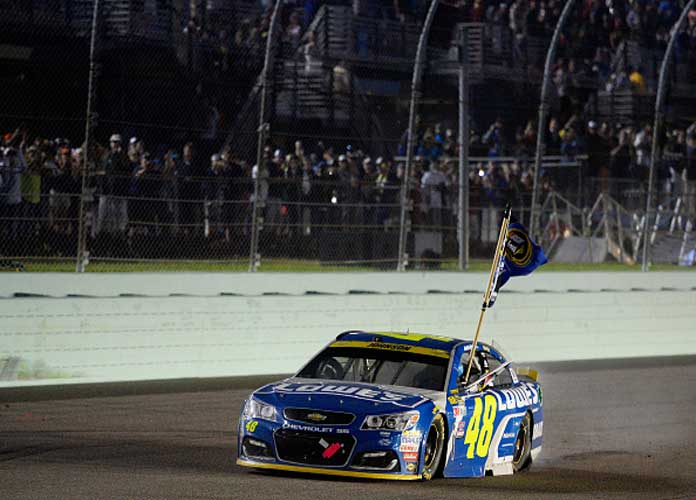 Johnson, 41, gained his first lead of the Ford EcoBoost 400 on the final restart, a two-lap overtime sprint to the checkered flag, and finished well ahead of Kyle Larson. Kevin Harvick finished third, followed by championship contender Joey Logano.

The driver’s seventh title tied Richard Petty and Dale Earnhardt Sr. for the most in Nascar’s 68-year history.

“I thought there was no way on earth this race was going to come to us,” said Johnson, who had been relegated to the back of the field for the start after Nascar officials found a technical issue on his Chevrolet in a pre-race inspection.

Johnson rapidly made up most of the deficit, passing 34 cars in the first 50 laps of the 267-lap scheduled distance. He spent the remainder of the race attempting to close the gap on the other three drivers: Carl Edwards, Kyle Busch and Logano. Edwards was consistently the fastest of the four contenders. Nevertheless, he triggered a big, nine-car pileup on a restart with 10 laps left, when he moved to block Logano.

“That was just good hard racing, and it was my deal, I own it,” Edwards said afterward. “I had to block Joey to have any chance at winning the championship. I couldn’t have gone to bed tonight if I had given up that lane to him.”

Logano, whose car became slightly damaged in the mess, agreed the contact in that situation was inevitable.

“He had to block me, or I would have passed him for sure,” Logano said. “That was the only thing he could do in that situation.”

Johnson won five of his titles in a row from 2006 to 2010, something which critics dismissed as simply a hot streak rather than the result of season-long consistency. His sixth championship came in 2013.

“I’m sure the world felt like anybody but Jimmie Johnson was going to win the championship with 20 to go,” Johnson said.

Johnson, who grew up in El Cajon, Calif., said he never expected a career in Nascar stock car racing, much less success in the series.

“I wouldn’t be here without so many people believing in me and giving me this chance, from my dirt days,” said Johnson, whose career started at age 5 on pee wee motorcycles.

When Tony Stewart, the three-time champion who retired following the race, went to congratulate Johnson, Johnson gave Stewart his helmet.

“That was special to me,” said Stewart, who finished 22nd in the final race of his career. “It will definitely go into my collection.”