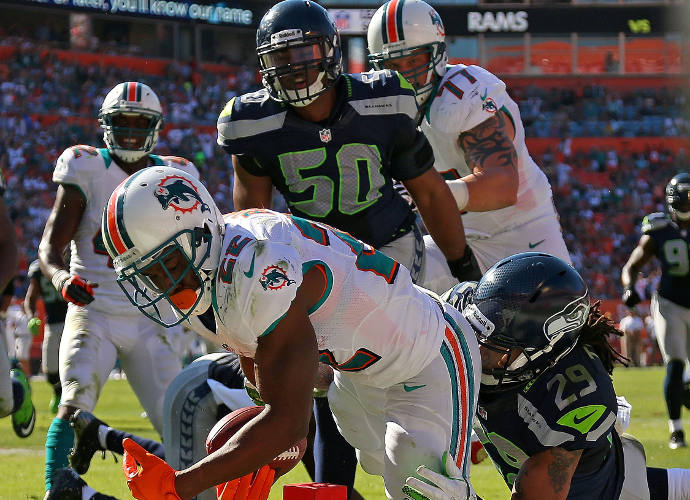 during a game at Sun Life Stadium on November 25, 2012 in Miami Gardens, Florida.

Moneyball seems to be making its way from baseball to football, but a Harvard student predicts that Superbowl 50 will pit the Seattle Seahawks against the Miami Dolphins – yes, you read that correctly.

Kurt Ballard developed a model for predicting the odds that NFL teams had in making the 2015 playoffs, the findings of which, were published on the Harvard College Sports Analysis College webpage.

His methodology was as follows:

The method that I came up with uses Pro Football Reference’s Approximate Value statistic, the site’s best measure of trying to tease out individual talent. Then, using ESPN’s NFL depth charts, I aggregated each team’s per game approximate value of what I considered to be the ‘core’ makeup of an NFL team: QB, RB, 2 WR, TE, Top 2 OL, the Top-4 ‘Front Seven’ defensive players, and the Top-2 players from the secondary.

Mr. Ballard must be a fantasy player buff, as most people who play for money already calculate teams around RAV’s and core players. But his predictions seem spotty. He calculates that in the NFC, the Seattle Seahawks have a 95 percent shot at making the playoffs, and after should get to the Super Bowl. They are trailed by on only 2 percent by the Green Bay Packers at 93 percent. That seems reasonable, as the Seahawks could have won the Superbowl last year, but someone, I won’t name any names, didn’t make Marshawn Lynch run the ball for the last play.

The real head turner of this study, though, is his prediction for the AFC, the Miami Dolphin with a 77 percent chance of making the playoffs. They are followed by the Kansas City Chief at 66 percent, and then the New England Patriots (guess he accounted for Brady’s impending suspension).