Geraint Thomas Crashes Into Pole After Being Bumped By Warren Barguil - uSports.org 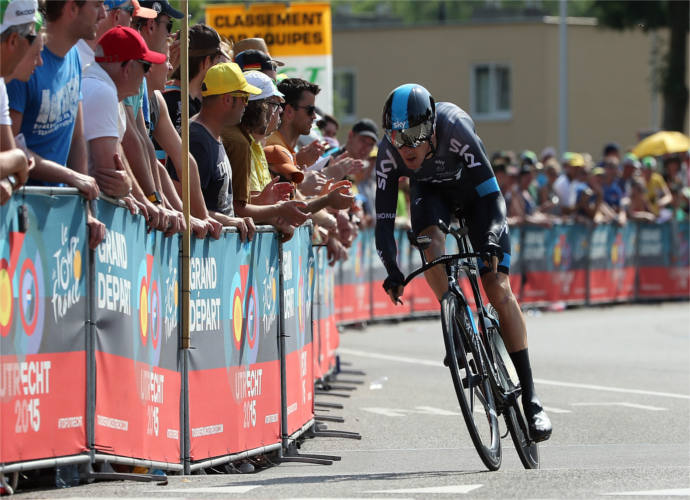 the individual time trial in stage one of the 2015 Tour de France on July 4, 2015 in Utrecht, Netherlands.

Geraint Thomas Crashes Into Pole After Being Bumped By Warren Barguil

Riding a bike down 42nd street in NYC during rush hour may have different hazards from riding down a mountain at 60 miles per hour, but there is one thing that unites them. Crashes.

Part of the sport of cross country cycling, crashes are a frequent if not unfortunate, occurrence.

In a recent incident at the tour de France, Team Sky’s Geraint Thomas rode away from a seemingly devastating crash near the end of Stage 16. Races, both foot and wheel, are many times dictated by the skill of a competitor traversing corners while maintaining a high speed. This causes a fight for “lines,” imaginary routes that maximize speed coming out of corners, which causes blind spots for riders in front, as aggressive line attacks tend to cut more sharply into other people paths.  This is exactly what happened when Warren Barguil took a very aggressive line into a corner, resulting in Thomas swerving offline and into a pole and barricade on the side of the road.

In Barguil’s case, however, while the line he took was aggressive, he did not necessarily have to crash into Thomas.

As seen in the recap from above, Barguil enters the line tight, but fails to turn, most likely signaling an intentional bump. When asked, Barguil said that brakes were the main culprit and the unsustainable speeds caused fear coming into the turn. He apologized later in the day.

Unfortunate race incident with @tejay_van @GeraintThomas86 and myself. I feel really sorry. Happy nobody got injured. #sorry

Thomas, though, only lost a minute of his overall time.