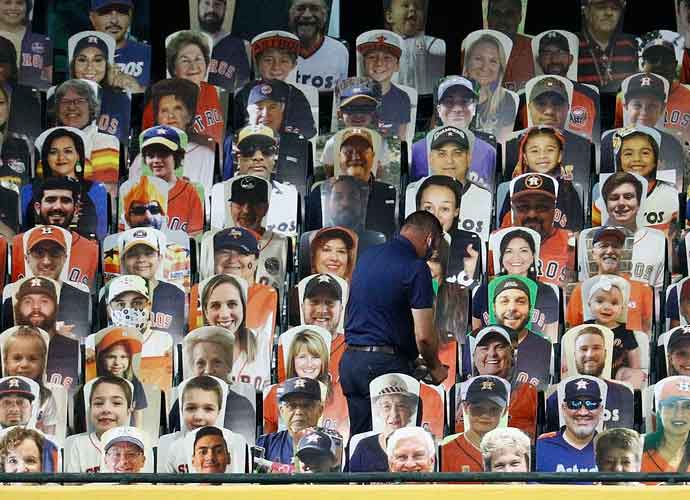 HOUSTON, TEXAS - JULY 27: A Houston Astros employee looks for a home run ball hit by Alex Bregman #2 of the Houston Astros in the Crawford Boxes during the third inning against the Seattle Mariners at Minute Maid Park on July 27, 2020 in Houston, Texas.

In the push to bring sports back in the past month, there will be a lot of experimentation – and clunkiness to be expected as broadcasts adjust to the new viewer experience. The latest attempt at innovation has come from Fox Sports which says that they intend to virtually add fans to the MLB games that they will be broadcasting over the next few weeks.

I have mixed feelings about this, but I do think that it is worth a shot.

I believe that his idea – and any other idea really – is a better option than those creepy fan cutouts that have been seen at some games. Overall, it feels disingenuous and takes away from the reality of the game – whether it be fake crowd noise or digitally added fans.

Brad Zager, head of production and operations for Fox Sports, explained the motivations behind the move. “We had a vision for making our Major League Baseball broadcasts look as natural as they were before COVID, ” he said. “A lot of that is having a crowd in the stadium.”

The institution that is professional baseball in America has been a bit of a mess in the past few months with the seemingly fraught negotiations between the owners and the players’ union then followed by a rush to return to play that feels as unorganized as trying to start up an entire sports league in a matter of weeks would. I don’t think baseball can get to a much lower point from where it is right now with many fans voicing frustration at the condensed schedule and the organizational incompetence. So I cannot fault Fox Sports for trying something new to get more engagement, but just like the restart itself, it feels a bit disingenuous.