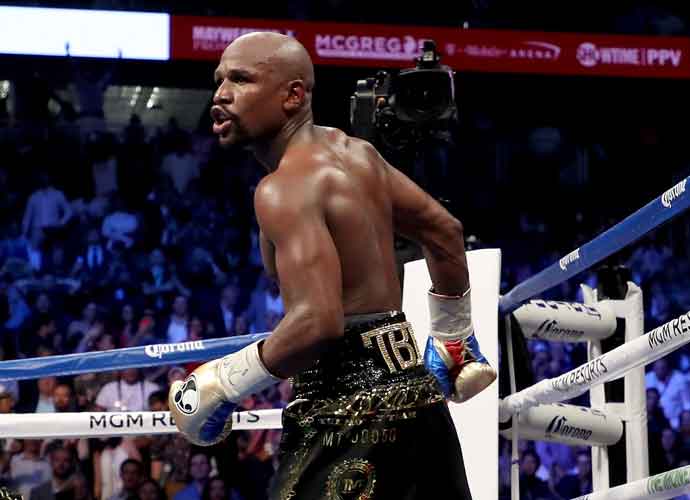 LAS VEGAS, NV - AUGUST 26: Referee Robert Byrd stops the fight in round 10 with a TKO of Conor McGregor by Floyd Mayweather Jr. in their super welterweight boxing match on August 26, 2017 at T-Mobile Arena in Las Vegas, Nevada. (Photo by Christian Petersen/Getty Images)

It was a star-studded affair at Turning Stone as Floyd Mayweather Jr. was inducted into the International Boxing Hall of Fame on Sunday. The undefeated boxer was emotional as he took the stage to be enshrined in the immortal hall alongside legendary names across various boxing spaces.

The 45-year-old was originally slated to be enshrined last year as he was a part of the Class of 2021, but the Covid-19 pandemic had caused the suspension of the 2020, 2021 and 2022 ceremonies. This made the June 9-12 affair one of the largest boxing events in recent memory. The induction, dubbed “Trilogy,” can be seen as one of the best classes of all time if viewed as one even.

Some of the honorees from the event include Juan Manuel Marquez, Miguel Cotto and Roy Jones. The ceremony included a few historic enshrinements including the first female fighters to be enshrined. These include Christy Martin, Lucia Rijker, Holly Holm and Laila Ali, daughter of legendary boxer Muhammad Ali. For Ali, this event was especially memorable because her induction came on her 54th birthday, and he first win came in October 1999 at the same venue, Turning Stone.

Missing from the induction was former heavyweight champion Wladimir Klitschko as he is helping his brother, Vitali, also a Hall-of-Famer and current mayor of Ukraine’s capital city Kyiv, with the Russian-Ukrainian conflict.

As for Mayweather, the Michigan-native could not hold his emotion during his speech before induction. “I want to say thank you to everybody for your support. I want to tell all the fighters – thank you, you guys are remarkable. There wouldn’t be no me without you guys,” Mayweather said. “I have done a lot in my career, but this is by far the best, I want to thank the International Boxing Hall of Fame for giving me this. This right here is going to my dad because he deserves it. Bernard Hopkins said it best, ‘You’ve got to earn it,’ and my dad earned this ring.”