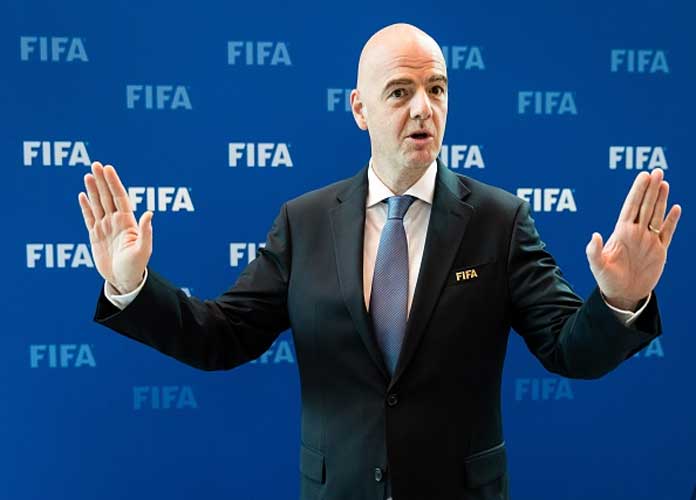 ZURICH, SWITZERLAND - OCTOBER 14: FIFA President Gianni Infantino poses for a photo after part II of the FIFA Council Meeting 2016 at the FIFA headquarters on October 14, 2016 in Zurich, Switzerland. (Photo by Philipp Schmidli/Getty Images)

FIFA on Tuesday announced it had published on its website a link to a report compiled by former United States attorney Michael J. Garcia that detailed the bidding process for the World Cups in 2018 and 2022.

Here are Garcia’s complete reports on the U.S. and Russia World Cup bids:

Garcia helped assemble the 430-page dossier while he worked as the chief ethics investigator for world soccer’s governing body in 2014. The document — which was kept hidden by FIFA’s ethics committee for more than two years — contained the findings of a several-months-long investigation into the process to select host countries for the 2018 and 2022 World Cups, which will be held in Russia and Qatar, respectively.

On Monday, German publication Bild said it obtained a copy of the report and threatened to gradually unveil its scandalous contents.

FIFA claimed the report was “illegally leaked” to the German tabloid and released a statement Tuesday to address its decision to publish the document:

“For the sake of transparency, FIFA welcomes the news that this report has now been finally published,” the statement read. The Association added that the decision was made “to avoid the dissemination of any misleading information.”

Russia and Qatar were voted the next two World Cup hosts in December 2010, and Garcia discovered evidence of corruption in his probe.

Garcia — who is now an associate judge at the Court of Appeals for the state of the New York — interviewed 75 witnesses over 18 months as part of his investigation, but ultimately did not find any concrete evidence that the Russian and Qatari committees had bribed FIFA officials in order to secure their respective countries as hosts for the 2018 and 2022 World Cups.

In the end, FIFA did not find any incriminating evidence that would have led the governing body to either relocate the tournaments or reopen the bidding for them.

BBC sports editor Dan Roan cited a source when he claimed in a tweet that Garcia’s report does not provide any evidence that either of the two World Cup host countries were selected illegally:

Bild journalist @PRossberg says leaked Garcia report “does not provide the proof that the 2018 or 2022 World Cup was bought” pic.twitter.com/VpREK6CYSn

Here are the main results of the investigation detailed in the report:

First, Garcia stated in his report that although he discovered no proof that Qatar’s official bidding committee had illegally obtained votes for a World Cup hosting gig, he was extremely concerned about the close ties between the country’s government and its bid committee, and about the inappropriate behavior of consultants seeking to further the bid.

Then, the former attorney revealed Russian president Vladimir V. Putin met with six FIFA voters in the months prior to the December 2010 hosting vote. Putin was then prime minister of Russia.

Finally, Garcia explained in detail how FIFA executive committee members and other notable officials dismissed him by either ignoring or verbally attacking him when he asked questions, and generally failed to cooperate with his probe. Nevertheless, Garcia held limited control of the investigation, given that he did not have subpoena power.

FIFA’s former chief ethics investigator did reveal, however, a series of direct or indirect favors carried out by several countries’ committees in order to obtain votes: a soccer field constructed in a voter’s country, trans-Atlantic flights on private jets, and — most stunningly — a $2 million payment deposited into the account of a FIFA voter’s 10-year-old daughter.

The probe also revealed — through summaries of FIFA meetings — that the organization’s executive committee had not discussed the issue of the scorching heat in Qatar. This problem has prompted several human rights organizations to criticize soccer’s governing body for exploiting workers in the tiny Middle Eastern nation who are involved in the construction of the stadiums for the 2022 World Cup, which will be held in the summer (June and July) as always.

Around 1.7 million migrant laborers are estimated to be participating in the construction of the venues in Qatar. Dutch Trade Union Confederation FNV issued a legal challenge on behalf of a Bangladeshi migrant worker named Nadim Sharaful Alam in October 2016, forcing FIFA to be held directly accountable in Swiss courts for improper working conditions and human rights violations, among other reasons.

Before Garcia officially released the report, however, German Hans-Joachim Eckert — FIFA’s former chief ethics judge — disclosed a 42-page summary of the document that said there was insufficient evidence to conclude that there was corruption in the voting process. Eckert added that there was thus no need to reopen the bidding process for the World Cups.

One month later — in December 2014 — Garcia resigned after losing an appeal related to the case. The former attorney then alleged that Eckert’s summary included “numerous materially incomplete and erroneous representations of the facts and conclusions.”

FIFA then stated the report could be published once all investigations into individuals had been finished.

As Garcia Report details emerge: a routine reminder of the crooks & clowns who voted to send the 2018 and 2022 World Cups to Russia & Qatar. pic.twitter.com/zHa6ZqoCSm

After Bild leaked the report on Monday, FIFA claimed in a press release Tuesday morning that the governing body’s current president, Gianni Infantino, had requested the report’s publication “on numerous occasions.”

“Despite these regular requests,” FIFA said in the statement, “it is worth noting that the former chairpersons of the Ethics Committee, Cornel Borbély and Hans-Joachim Eckert, had always refused to publish it.”

However, Eckert and Bobely — who had replaced Garcia as FIFA’s chief ethics investigator — denied in their own statement later Tuesday that Infantino had ever demanded this.

“To this day,” they said, “Mr. Infantino has never contacted us and asked for a publication.”

Eckert — who cited privacy concerns as a reason for not publishing the report — and Bobely were both terminated this year. At that time, they implied that their ongoing ethics probes into several top FIFA officials had been hindered by their removal.

In 2015, dozens of FIFA officials were indicted on corruption-related charges in the U.S. Blatter was forced to resign and was banned for six years following an internal ethics investigation.

ZURICH, SWITZERLAND – OCTOBER 14: FIFA President Gianni Infantino poses for a photo after part II of the FIFA Council Meeting 2016 at the FIFA headquarters on October 14, 2016 in Zurich, Switzerland. (Photo by Philipp Schmidli/Getty Images)