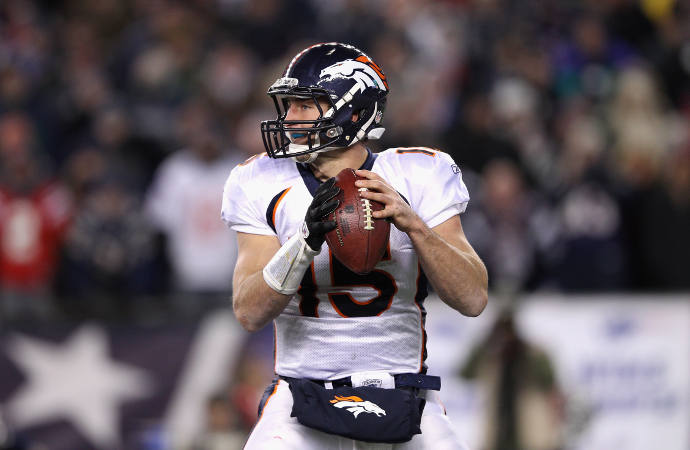 during their AFC Divisional Playoff Game at Gillette Stadium on January 14, 2012 in Foxboro, Massachusetts.

Professional athletes are no strangers to unique autograph requests, and a recent one to Philadelphia Eagles quarterback Tim Tebow, had him sign a bible.

The fan, who apparently is as religious as Tebow, approached the quarterback during an open practice at the Eagle’s training camp at the Lincoln Financial Field, and straight up asked him to sign the bible. If they are both religious, wouldn’t that be desecrating a holy book?

I’m pretty sure someone got Tim Tebow to sign a bible. Don’t know how I missed this before… #Eagles pic.twitter.com/B33xCoPFbH

In any case, it won’t lose the Eagles brownie points when Pope Francis visits Philadelphia in September. Perhaps they should all pray that no one gets injured, specifically Sam Bradford’s Knees. And no, don’t ask the Pope, just ask Tebow, although something says he probably would not do that anyway.

Or maybe Tebow should pray for a starter’s slot, as he hasn’t played in for an NFL team since his 2012 stint with the New York Jets.  And let’s be honest, his tenure as quarterback for the Jets was not the same as it was when he was with the Broncos.

He has a career 173 of 361 passing ratio that comes out to a sub-par 47.9 percent for a total of 2,422 passing yards. Most of the yardage came from his time with the Broncos, as he only played Wildcat for the Jets, and threw 39 yards while there.