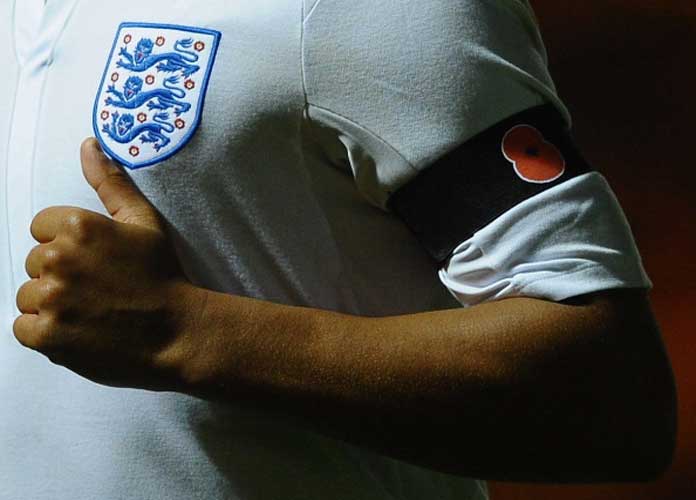 COLCHESTER, ENGLAND - NOVEMBER 10: Alex Oxlade-Chamberlain of England wears a poppy armband during the UEFA Under-21 Championship Group 8 Qualifier between England and Iceland at the Weston Homes Community Stadium on November 10, 2011 in Colchester, England. (Photo by Laurence Griffiths/Getty Images)

The Football Associations of England and Scotland say they will both defy a ban on players wearing poppies when the two teams face off at Wembley on Armistice Day (Nov. 11) for a 2018 World Cup qualifying match.

The FAs will allow players to wear black armbands with poppy emblems and are willing to accept any punishment.

UK Prime Minister Theresa May has called the rule “outrageous.”

Back in 2011, England brokered a compromise with FIFA wherein players were allowed to wear poppies on black armbands rather than on their jerseys for a friendly game versus Spain. England hoped for a similar arrangement for the Friday, Nov. 11 matchup against Scotland.

English FA chief executive Martin Glenn told BBC Sport that players from both sides would wear black armbands carrying the poppy symbol– traditionally used to remember those who died during World War One – “as a point of principle.”

Glenn added: “We are standing shoulder to shoulder with the other home nations on this, we all feel very strongly. It’s not a political symbol and I think most people would agree with us.”

A points deduction would be among the possible punishments FIFA could inflict on any team who defies the ban, although Glenn does not believe it will come to that.

The Football Association of Wales has also written to FIFA requesting permission to don poppies on armbands during their match against Serbia in Cardiff on Nov. 18, but has not yet committed to defying the ban.

Samoura has questioned why an exception should be made for England, Scotland and Wales.

“We have to apply uniformly and across the 211 member associations the laws of the game,” she said. “Britain is not the only country that has been suffering from the result of war. The only question is why are we doing exceptions for just one country and not the rest of the world?”

A petition begging FIFA not to uphold the ban has garnered more than 250,000 signatures.

Earlier on Wednesday, the issue was discussed in Parliament.

“Before they start telling us what to do, they jolly well ought to sort their own house out,” said Mrs May, citing the recent FIFA corruption claims which have seen dozens of former officials prosecuted or banned from the sport.

“Our football players want to recognize and respect those who have given their lives for our safety and security. It is absolutely right they should be able to do so.”

COLCHESTER, ENGLAND – NOVEMBER 10: Alex Oxlade-Chamberlain of England wears a poppy armband during the UEFA Under-21 Championship Group 8 Qualifier between England and Iceland at the Weston Homes Community Stadium on November 10, 2011 in Colchester, England. (Photo by Laurence Griffiths/Getty Images)