Dusty Baker Has Earned Another Year As Astros Manager - uSports.org 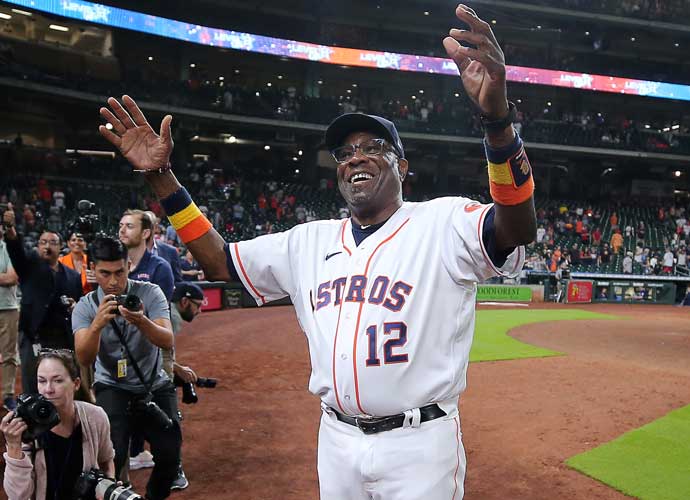 HOUSTON, TEXAS - MAY 03: Manager Dusty Baker Jr. #12 of the Houston Astros celebrates his 2000th career win after a game against Seattle Mariners at Minute Maid Park on May 03, 2022 in Houston, Texas. (Photo by Bob Levey/Getty Images)

Three days after winning the World Series, the Houston Astros announced Wednesday that they were granting manager Dusty Baker’s request for a one-year extension.

After 25 seasons as an MLB manager and more than five decades in the sport, his championship victory merely affirms the fact that he should get whatever he wants at this point in his career.

When Baker took over in Houston in 2020, his job was to provide stability and likability to a team under fire. The Astros were reeling from the offseason investigation of their 2017 sign-stealing scandal, one that resulted in suspensions for manager A.J. Hinch and GM Jeff Luhnow. Perhaps even more importantly, however, the team became the most vilified in recent sports history.

Though Baker entered with an immense amount of good will among fans, having coached for the Giants, Cubs, Reds and Nationals since 1993, the team still suffered under seething vitriol for a time. If not for the COVID-19 pandemic, road games would have been hostile all season, like they were in spring training that year.

From the very beginning though, Baker remained focused in the face of open contempt, insisting that no form of cheating would ever occur on his team. Though the team hired him to be a friendly face, he said that his goal was to win as many games as he could. He did well, guiding the team to the ALCS in 2020 and a World Series appearance in 2021.

In a 2022 season full of powerful contenders, Baker guided the team to a 106-win season. While other favorites wilted in the playoffs, Houston thrived, sweeping the Mariners and Yankees to advance to the World Series for the second straight year.

In 1981, Baker won a championship as an outfielder for the Los Angeles Dodgers, but as a manager, he had been chasing another ring for more than two decades. A Game 6 victory Sunday over the Philadelphia Phillies finally made it a reality, as the Astros won their third World Series in six years and first since the sign-stealing scandal was exposed. It was legitimate.

But as Baker has repeatedly said over the years, if he was going to win one championship, he would always want to go for two. The organization has rightfully granted him that opportunity with a well-deserved extension.

“How many times in your life do you say something and then have the opportunity to fulfill it?” Baker said Wednesday. “I wasn’t just talking. I meant what I said. I love keeping my word. We’ve got a chance to win back-to-back and this is what I’d like to do.”

He’s 73 years old, the oldest coach to ever win a championship in professional sports. On nearly any other team in the league, he might have been blamed for the organization’s woes and ousted by now. But as the leader of the Astros, a team long on talent but short on fan sentiment, Baker has found the perfect spot to end his career. He’s done enough for Houston and the sport beyond to leave on his own terms, and if he believes there’s more on the horizon, it’s hard to question him.

“I’d be going against what I was destined to do if I did anything else at this point in time,” Baker said. “I prayed on it and my answer was, ‘Hey man, get your butt back out there and manage again.’”