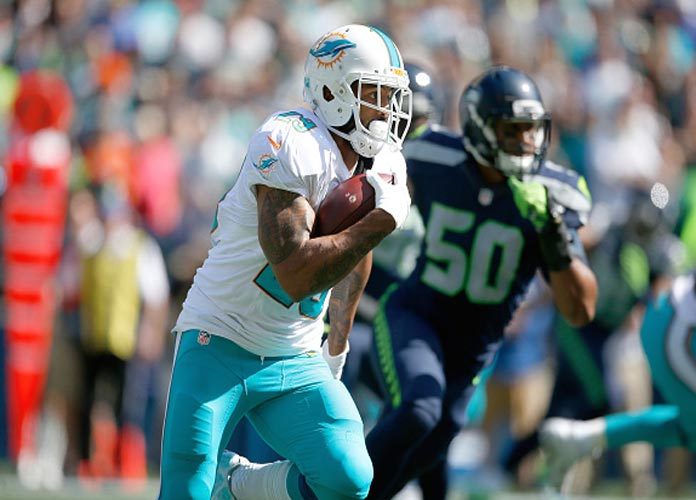 SEATTLE, WA - SEPTEMBER 11: Running back Arian Foster #29 of the Miami Dolphins rushes against the Seattle Seahawks in the first quarter at CenturyLink Field on September 11, 2016 in Seattle, Washington. (Photo by Otto Greule Jr/Getty Images)

Arian Foster and three of his Miami Dolphins teammates were scathingly lambasted for their decision to kneel during the national anthem before their team’s 12-10 loss to the Seahawks in Seattle on Sunday.

Scores of people expressed their anger with the move on social media, saying it disrespected the flag and those who fight or have fought to protect America’s freedoms and values.

Foster, however, stood by his action — which was inspired by San Francisco 49ers backup quarterback Colin Kaepernick — and after Sunday’s game, the 30-year-old running back made an analogy that likened kneeling for the flag to kneeling during a church service.

“I’ll make one thing clear, it’s not about the symbology that people are mad about,” Foster said of kneeling, via the South Florida Sun-Sentinel. “It’s about the message and it’s about who’s saying it because if it’s about a knee that people are upset about, every Sunday, people of faith take a knee to give thanks to their Lord and Savior, whatever faith or whatever religion they are.”

Foster’s full comments can be seen in the video below:

Kaepernick’s protest went viral on Aug. 26 after he refused to stand for playing of the national anthem before the 49ers’ third preseason game.

“It never dawned on to me to make a statement like that,” Foster said, via USA Today. “That’s why I feel like what Colin did — I agree with him and I understand 100% what he’s doing. Rather than sparring with anybody publicly about which way was the right way and which way was the wrong way, I took my ego out of it and said ‘This conversation has started once again.’ I feel like I had a responsibility to keep it going, because it’s healthy conversation.”

The running back also added that there’s one other argument he has continually heard from dissenters that bothers him: that this is not the adequate moment to launch this type of protest.

“They say ‘It’s not the time to do this.’ Well, when is the time?,” Foster said. “It’s never the time in somebody else’s eyes because they’ll always feel like it’s good enough and some people don’t. That’s the beautiful thing about this country, if somebody feels it’s not good enough, then they have the right, and that’s all they’re doing is exercising their right.”

Foster and his teammates Kenny Stills, Jelani Jenkins, and Michael Thomas all kneeled before Sunday’s game. The move carried a special significance since it came on the 15th anniversary of the 9/11 attacks.

Foster makes a great point. If now is not the right time, then when will it be? How much longer will we as a nation have to wait for at least one person in all areas of life (politics, sports, entertainment, etc.) to take a stand against injustice and oppression? If not football players, then who?

Jenkins also expressed why he personally chose to go through with the protest, adding he decided to protest days before the game.

“A lot of things are happening to people that look like me,” Jenkins said. “I think that it was pulling on my heart to stand up and not act like I haven’t seen [injustice] and not act like everything is OK, because it’s not. So it’s very important to me.”

Kaepernick’s protest has gradually been gaining traction, and more players will surely continue to replicate his action.

SEATTLE, WA – SEPTEMBER 11: Running back Arian Foster #29 of the Miami Dolphins rushes against the Seattle Seahawks in the first quarter at CenturyLink Field on September 11, 2016 in Seattle, Washington. (Photo by Otto Greule Jr/Getty Images)