Mississippi State quarterback Dak Prescott emerged in 2014 as a player to watch. And his amazing junior year was pushed into the primetime spotlight as Mississippi State enjoyed their first ten win season since 1999.

But according to various media outlets, Prescott was jumped while spending time in Panama City for spring break. The following video contains some graphic images and is NSFW.

In the video, Mississippi State players were ferociously jumped and beaten by several individuals. Afterwards, Prescott stumbles to get up and an unidentified friend remains unconscious on the pavement.

It was later reported that the three jumped players were Dak, Torrey Dale and Damian Williams, according to Yahoo Sports.

At the moment, they will not be pressing charges, according to ESPN’s Edward Aschoff. And immediately after the incident, they allegedly canceled plans and returned to the Mississippi State campus.

Afterwards, the potential Heisman candidate and Torrey Dale took to Twitter to tell fans that they are fine.

Thanks for all the Concerns and Prayers! I'm okay and ready to get back to Starkville. Ignorance happens! Be safe on Spring Break!

It's what comes with the game, we wear the big name:..#itsexpected we're good though

As for the cause of the incident, spokesman Bill Martin told ESPN that the kids were “jumped,” Prescott took majority of the hits and that the players did not instigate the fight.

But even though Prescott does not want to press charges, it appears the people who doled out the beating are not being quiet about the situation, as they bragged on Twitter about “beating on Prescott and the running back #15.” And while Str8lafamilia_lildee’s page is private, SB Nation was able to post the attacker’s tweets about the incident. 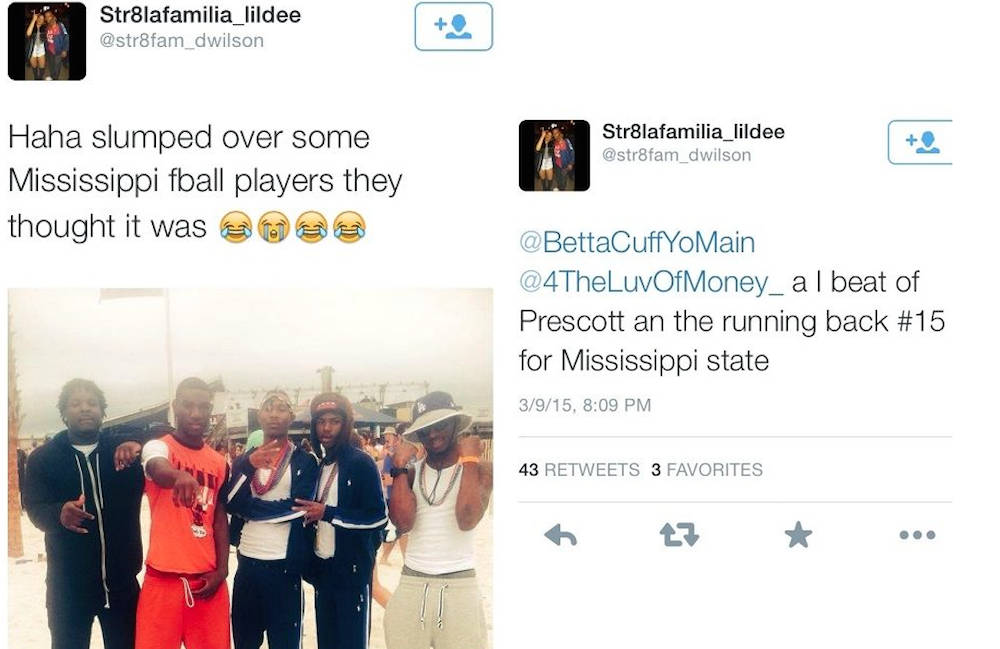 Prescott will enter the 2014 season with a 60.4 completion percentage, 5,583 passing yards, 71 total touchdowns, 18 interceptions, a passing efficiency rating of 142.5 and a potential Heisman nominee.

Read more about:
Dak Prescott Mississippi State NCAA Football
Listen to the uInterview Podcast!
Get the most-revealing celebrity conversations with the uInterview podcast!