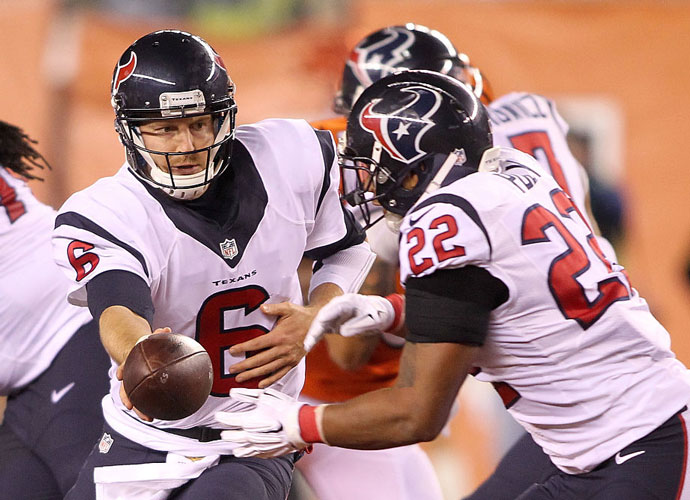 The Cincinnati Bengals witnessed their first loss of the season against the Houston Texans on Monday night at their very own Paul Brown Stadium. Backup quarterback T.J. Yates led the Texans to a 10-6 victory, their fourth win of the season after starting QB Brian Hoyer suffered a concussion during the third quarter.

Following three completions (his first three since signing with the Texans on Oct. 28) on his first drive, Yates sent a 22-yard pass to DeAndre Hopkins, who caught the ball with one hand, to score the game’s only touchdown.

Yates had already scored two victories against the Bengals as a rookie during the 2011 season, one of which came during the first round of playoffs, the Texans’ first in the post season.

Bengals QB Andy Dalton struggled to put up with the Texans’ defense, racking up 21 pass completions out of 37 for 187 yards, as well as one interception and three sacks. The Bengals’ final opportunity came in the last 40 seconds of the game, when A.J. Green caught a ball that would have brought in a first down at the Texans’ 23-yard line , until he was robbed by Quintin Demps.

Cincinnati led 6-3 in the first half, which was rife with penalties and missed plays. Both quarterbacks led their teams in rushing: Hoyer gained 15 yards, while Dalton had 30 yards on five carries.

The Texans have especially struggled to get a running game going (they only snagged 25 yards in the first half) since Arian Foster has been sidelined by an Achilles tendon injury.

The Bengals are undefeated no more, as the Texans beat them 10-6 on the road! pic.twitter.com/HHQYl7ERFE