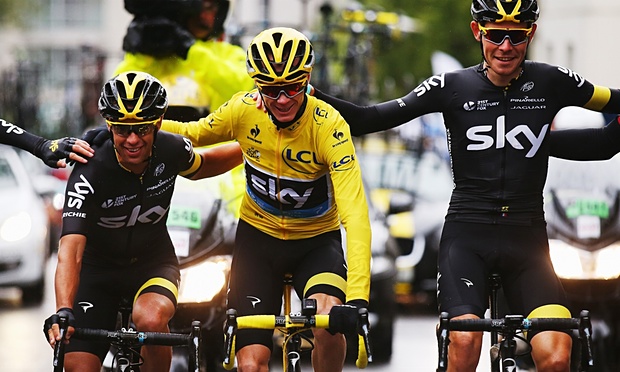 British cyclist Chris Froome celebrated in Paris for the second time in three years as the Tour de France champion. Froome won this year’s event by 1 minute and 12 seconds over Colombian Nairo Quintana. The victory makes Froome the first ever two-time Tour de France champion to come out of Great Britain and continued the recent run of British success in cycling.

After surviving a hard charge by Quintana in the final day in the Alps on Saturday, Froome was able to ease his way to victory through the streets of Paris in Sunday’s 21st Stage. The race is almost always won in the penultimate stage, as the final stage is usually reserved for the sprinters while the peloton rides together one last time. Froome’s victory was all but official when the riders hit the Champs-Elysees, as race organizers finished the times for general classification after the first of 10 laps due to wet roads.

Andre Greipel of Germany won the final stage after holding off his fellow sprinters at the line. Mark Cavendish, a four time stage winner on the Champs-Elysees, settled for sixth on the day.

Froome and his Team Sky teammates completed the tour arm-in-arm as they crossed the finish line. Froome’s victory means Team Sky have won the Tour de France three times in the past four years, as well as three of the past four of cycling’s biggest races.