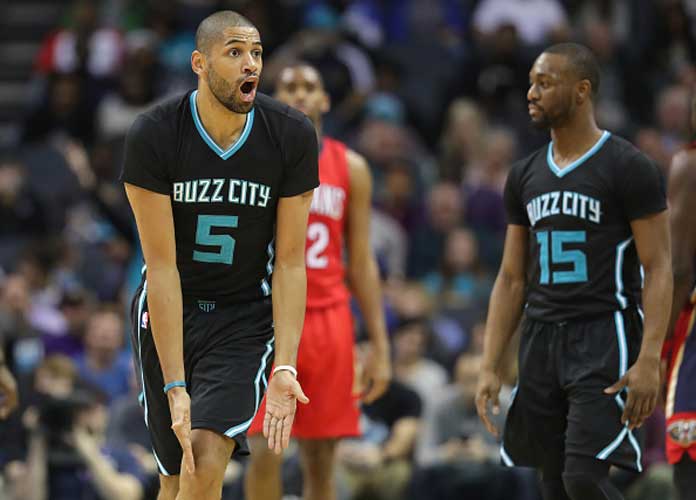 CHARLOTTE, NC - MARCH 11: Nicolas Batum #5 of the Charlotte Hornets reacts after a call during their game against the New Orleans Pelicans at Spectrum Center on March 11, 2017 in Charlotte, North Carolina.

The NBA announced Wednesday that Charlotte has been chosen as the host city for the 2019 All-Star Game.

The event will be held at the Hornets’ Spectrum Center the weekend of February 15-17, 2019.

Charlotte was originally set to host this year’s All-Star Game, but was pulled in July due to North Carolina’s controversial HB2 law. This so-called “bathroom bill” dictated people to use public restrooms that match the gender listed on their birth certificate. However, that law has now been repealed, even though many LGBT people (transgender especially) say this repeal did not “go far enough,” as NBA Commissioner Adam Silver said in a statement.

“For three decades, the NBA has had a home in Charlotte. Generations of families have attended games there, and fans from many different walks of life have come together to share a passion for a team that is an anchor in the community,” Silver’s statement read. “We have decided to award NBA All-Star 2019 to Charlotte based on this deep connection and the belief that we can honor our shared values of equality and inclusion, and we are excited to bring the All-Star Game back to Charlotte for the first time in 28 years.”

The statement continued by addressing the bathroom bill: “While we understand the concerns of those who say the repeal of HB2 did not go far enough, we believe the recent legislation eliminates the most egregious aspects of the prior law. Additionally, it allows us to work with the leadership of the Hornets organization to apply a set of equality principles to ensure that every All-Star event will proceed with open access and anti-discrimination policies. All venues, hotels and businesses we work with during All-Star will adhere to these policies as well.”

Silver added that he is confident Charlotte will prove to be a great city to help the NBA promote unity.

“Sports have a long history of helping to change attitudes around important social issues. We believe holding our All-Star activities in Charlotte will be a powerful way for the NBA to continue this tradition.”

The event in Charlotte in 2019 will mark the first time the NBA All-Star Game has been played in the North Carolina city in 28 years.

The NCAA also took heat in April — shortly after UNC won the national basketball championship — for lifting its ban on hosting tournaments in North Carolina following the state’s repeal of the discriminatory bill. Activists from the LGBT community also cited the repeal was insufficient.

CHARLOTTE, NC – MARCH 11: Nicolas Batum #5 of the Charlotte Hornets reacts after a call during their game against the New Orleans Pelicans at Spectrum Center on March 11, 2017 in Charlotte, North Carolina.

Duke Are Heaviest No. 1 Favorites To Win NCAA Tournament Since 2014-15 Kentucky Wildcats