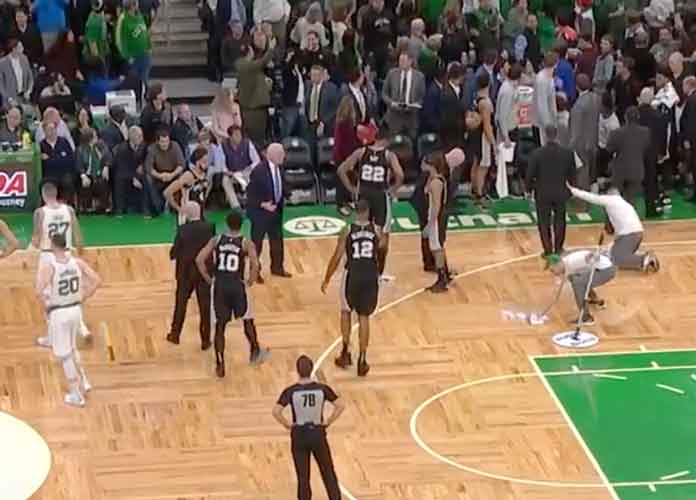 Celtics fan arrested for throwing beer can at Spurs bench

A Boston Celtics fan was thrown out of TD Garden and arrested on Wednesday after he tossed a beer can in the direction of the San Antonio Spurs bench.

The incident occurred during a stoppage of play in the third quarter of the Celtics’ 129-114 loss. Boston guard Kemba Walker was ejected after drawing consecutive technical fouls. Walker began contesting a no-call of a foul on Spurs star LaMarcus Aldridge.

GET DEALS ON CELTICS TICKETS HERE!

Celtics coach Brad Stevens reportedly apologized to his Spurs counterpart Gregg Popovich for the fan’s behavior following the matchup and added he hoped the young man would never be allowed to come to any NBA game again.

“I love our fans, love the passion that they bring. They certainly bring a lot of energy, but we’ve got to try to stay away from that,” said Gordon Hayward.

Video footage of the incident shows a beer can flying from the stands behind the Spurs’ bench and landing by the feet of one of San Antonio’s players. The can was not empty, so the court’s floor had to be wiped down before play continued.

Take a look at what happened here:

A fan threw a drink on the court after Kemba got ejected 🍺 pic.twitter.com/ACPQPLNVwK

RT @YahooSports: 1. Kemba gets laid out on a hard screen
2. Kemba gets ejected
3. Celtics fan throws a beer at the Spurs bench

The NBA instituted new rules regarding fan behavior late last year, so it’s no surprise this incident was dealt with so quickly.