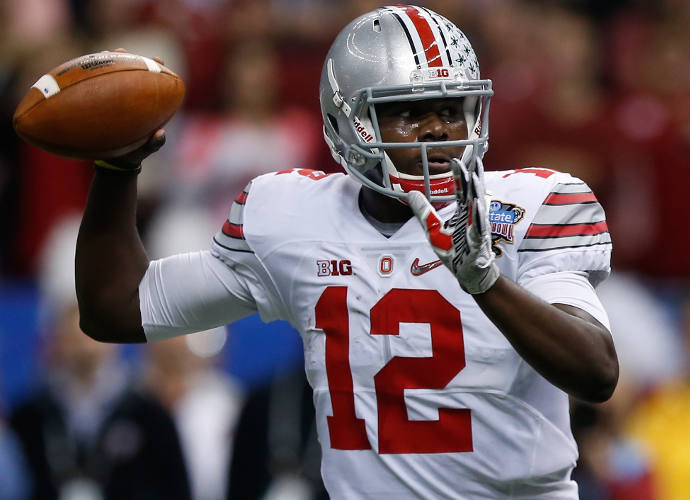 Ohio State quarterback Cardale Jones is good at finding the open man, but he is just as good at shutting down trolls. As he was tweeting his thoughts on the #AllLivesMatter controversy, an OSU fan, who deleted his account after the exchange, told him to stick to sports.

You tell me that #AllLivesMatter well I say how do you define "All" ?

Retweet if you agree with me #BlackLivesMatter

After this tweet, @DanGustafson1 replied saying, ” @CJ12 worry about getting us fans another championship… Stay out of this bullsh*t #GoBucks.” Now maybe because of plain text, context, and general knowlege of Mr. Gustafson’s personality, it is hard to tell if he is serious or joking, but it remains selfish regardless. He didn’t know however, that Jones would not take kindly to his statement. Jones responded with the tweets:

@DanGustafson1 Sorry Mr master, I aints allow to tweet nothing but foolsball stuff I donts want you think I more than a foots ball playa sir

Jones’ response was brilliant and was very Pharell-esque in a very tense racial environment. A few hours after the incident, and before Gustafson deleted his Twitter, he tweeted back to Jones, saying, “@CJ12 I owe you an apology. I meant no disrespect. Hashtag activism hasn’t saved any lives. Just makes people feel better.” Now, he is apologizing, but it seems toned with the same intent as his first tweet.

Gustafson ended his Twitter campaign with two last tweets: “@Dancewet86 @CJ12 not really… I got blasted. All part of the twitter experience I guess” and ” @Jcoleshoe @Notoriouswojo @Cj12 Worded poorly, but apologized. Didn’t mean to offend anyone.”