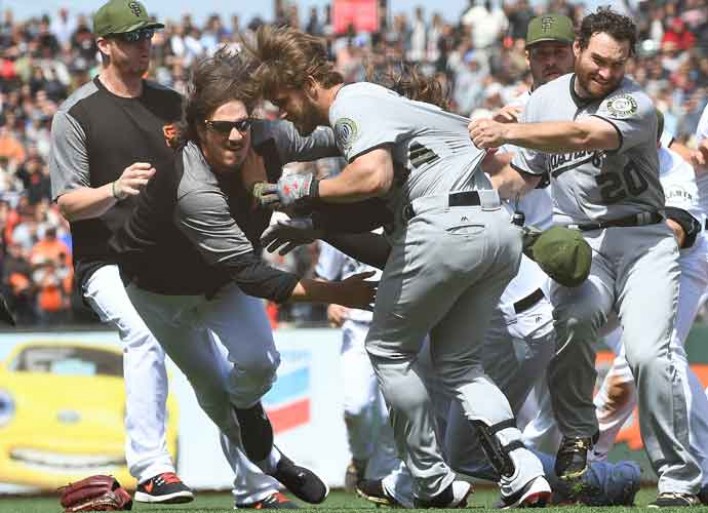 SAN FRANCISCO, CA - MAY 29: Jeff Samardzija #29 of the San Francisco Giants goes after Bryce Harper #34 of the Washington Nationals after Harper charged the mound from being hit by a pitch from Hunter Strickland #60 in the top of the eighth inning at AT&T Park on May 29, 2017 in San Francisco, California. Giants Michael Morse #38 jumps in the middle as National's Daniel Murphy #20 tries to pull Harper away. (Photo by Thearon W. Henderson/Getty Images)

Major League Baseball has decided to suspend both the National’s Bryce Harper and the Giant’s Hunter Strickland after the two fought and sparked a benches-clearing brawl on Memorial Day. Harper will receive a 4 game suspension while Strickland will be suspended for 6.

The incident occurred when Strickland, a relief pitcher for the Giants, intentionally threw at Harper, hitting him in the hip with a 98 mph fastball. Harper pointed to Strickland, dropped his bat, and charged mound, throwing his helmet towards first base. The two players exchanged several punches before both teams were on the field separating the feuding players.

In addition to the games missed, both players received undisclosed fines. Strickland and Harper have both appealed, meaning they will be able to play until an additional ruling is made.

The Memorial Day brawl was all but random. In 2014, during the NLDS, Harper smacked two home runs off of Strickland. After both hits, Harper moseyed out of the batter’s box, admiring his work. Strickland took notice and, according to Harper, chose Memorial Day to exact his revenge, despite the three years in between incidents – the Giants ultimately went on to win the World Series in 2014, as well.

“I wasn’t really thinking about it at all. But when somebody comes at you like that, throws a 90 mph fastball where he did, I wasn’t very happy with it and took it into my hands and tried to go after him,” Harper told ESPN.

National’s manager Dusty Baker agreed with his player. “We’re ahead 2-0, two outs, nobody on base. That’s a prime time to hit somebody if you’re going to hit him. It looked like it was intentional to me,” Baker said.

Strickland maintained that he was only trying to keep the ball inside and missed. “I didn’t expect that but that’s part of that game and that’s what he decided to do,” Strickland told reporters after the game.

Bryce Harper’s helmet deserves to go on a journey after that horrendous throw 😂 #ShootingStars pic.twitter.com/XtPtSGz4az

If the suspensions hold, both Harper and Strickland will be missed by their respective clubs. Strickland is currently 1-1 with a 1.53 ERA through 17.2 innings pitched. Harper, who leads the league in All-Star voting by a large margin, boasts a .322 AVG, with 15 HRs and 41 RBI.

The Nationals look to sweep the Giants in the final game of the three game set tonight at 10:15 p.m. EST in San Francisco.