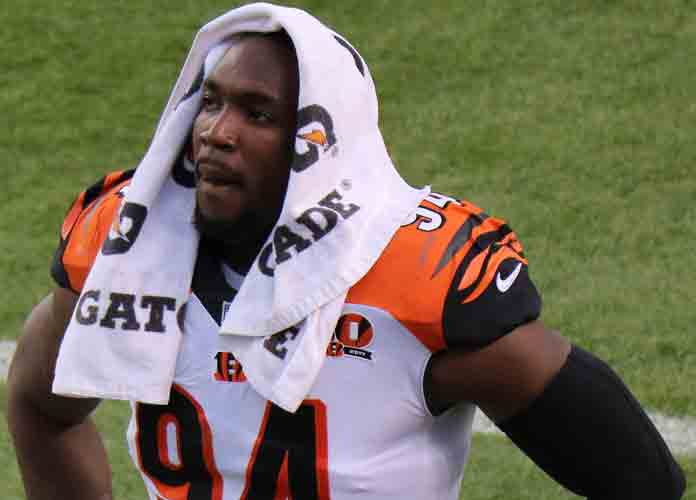 Chris Smith with the Browns in 2017 (Jeffrey Beall/Wikipedia)

Police were told that Smith was driving on Interstate 90 with Cordero in his Lamborghini at around 2 a.m. when a tire malfunction caused the couple to crash against the wall. Neither Smith nor Cordero were initially hurt, although when Cordero stepped out of the vehicle, she got hit by another woman in a Mazda.

The woman in the Mazda admitted to the authorities that she had been drinking. Her blood alcohol content has yet to be released.

Smith, 27, broke his silence via an Instagram post on Friday that included several photos and videos of Cordera, both with him and without him.

“God has a plan for all of us we can’t understand but she is in a better place now and she can rest easy,” the defensive end captioned the post. “My wifey my best friend and the mother of my beautiful daughter. Love you baby,” Smith added, using the hashtags “#StayStrong” and “#RIPMyLove.”

God has a plan for all of us we can’t understand but she is in a better place now and she can rest easy. My wifey my best friend and the mother of my beautiful daughter. Love you baby❤️🙏🏾 #StayStrong🙏🏾🥰❤️ #RIPMyLove

Just last month, Smith had shared a photo on Instagram to reveal he and Cordero had a daughter named Haven.

I’m so thankful to have another beautiful gift in this world my daughter Haven Harris Smith. You are such a blessing to me and your mother!! Love you Petara and Baby Haven❤️❤️❤️

Cordero and Smith were both born and raised in Salisbury, North Carolina. Smith was originally drafted by the Jacksonville Jaguars but was then traded to the Cincinnati Bengals in 2017 and signed with the Browns last year. Cordero and her child lived in North Carolina and were in Cleveland for a visit when the accident occurred.

Cordero apparently exited the vehicle and was standing on the road’s shoulder when she got struck.

Browns owners Jimmy and Dee Haslam gave the news to the team and immediately issued a statement.

“Words cannot describe the sorrow we feel for Chris following the loss of his girlfriend, Petara,” the Haslams said. “Our entire organization mourns with Chris, his family and the Cordero family. We will do everything possible to offer them our support, comfort and any resources in this most difficult time.”

There is sure to be a tribute to Petara on Monday night at 8:15 p.m. EST, as the Browns play the New York Jets.