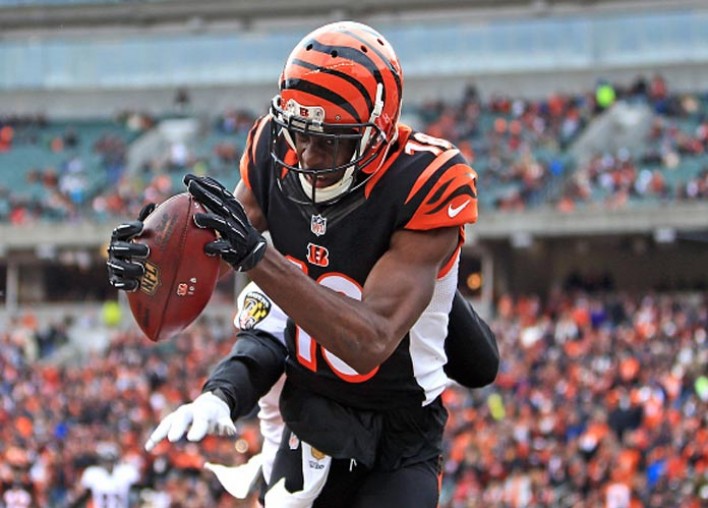 CINCINNATI, OH - JANUARY 3: Wide receiver A.J. Green #18 of the Cincinnati Bengals catches a pass for a touchdown while being defended by defensive back Shareece Wright #35 of the Baltimore Ravens during the third quarter at Paul Brown Stadium on January 3, 2016 in Cincinnati, Ohio. (Photo by Andrew Weber/Getty Images)

In what seems to be a yearly tradition, Cincinnati Bengals All-Pro receiver A.J. Green is hurt again. This time, before the season even begins.

Green, the most important cog for the Bengals offensively, is expected to miss 6-8 weeks after suffering torn ankle ligaments during a Bengals practice in Dayton, Ohio.

The seven-time Pro Bowler needed to be carted off the field after landing awkwardly trying to make a catch during 7-on-7 drills during Saturday’s open practice. After getting an MRI, Green was seen walking around on crutches.

The real drama in this story is that the open practice instead of being held at the practice fields next to Paul Brown Stadium. Instead, the Bengals held their practice in Dayton as a part of the NFL’s 100th-anniversary celebration of the 13 original cities to host a professional football team.

According to Sports Illustrated, there were already questions about the field before Green injured himself.

AJ Green just wheeled into the #Bengals locker room on a scooter. He has a boot on his left foot. Still no official word from the Bengals on his injury timeline.

After working there for an hour on Saturday, several Bengals staffers were frustrated that Green’s injury happened on a field that they saw as subpar. One mentioned that players were sliding all over the place during what was a shorter-than-usual camp practice. Another saw pebbles lodged into the turf.

Tyler Boyd, another receiver for the Bengals, also had issues with the conditions of the field, calling them terrible.

“The turf was terrible. I couldn’t run any routes out there. I’m falling all over the ground. It was bad. It was rocks, pebbles out there. Man, it was somewhere we shouldn’t have been. I’m not trying to say any excuses, but it is what it is.”

This team is CURSED. It's the only damn explanation.