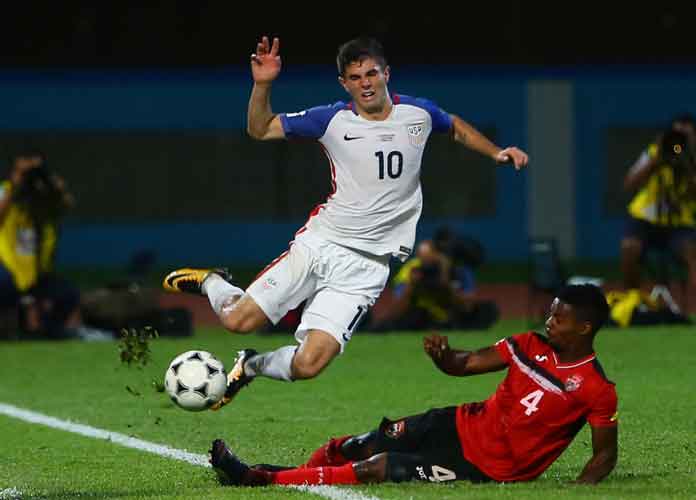 COUVA, TRINIDAD AND TOBAGO - OCTOBER 10: Christian Pulisic (L) of the United States mens national team is tackled by Kevon Villaroel (R) of Trinidad and Tobago during the FIFA World Cup Qualifier match between Trinidad and Tobago at the Ato Boldon Stadium on October 10, 2017 in Couva, Trinidad And Tobago. (Photo by Ashley Allen/Getty Images)

The deal, which pays a transfer fee to his old club, makes him the most expensive American soccer player of all time and will bring him to England’s Premier League.

Pulisic, who’s been with Borussia Dortmund since he was 16, will play out the rest of the season before transferring over. Previously, his contract was set to expire at the end of the 2019-2020 season. Pulisic also plays for the US Men’s National Team and is a native of Hershey, Pennsylvania.

On Tuesday, Pulisic took to Twitter to thank his fans in Germany. “It feels like only yesterday that I arrived in Dortmund as a raw, excited very nervous but exceptionally proud 16-year-old,” he wrote. “I would not be where I am today without the Club and their belief in giving young players a chance.”

Pulisic was originally only able to join the team at 16 years old due to the fact that his grandfather was from Croatia. This enabled him to get a Croatian passport and play in Europe before turning 18.

Dortmund’s sporting director called Chelsea’s bid an “extremely lucrative bid.” “It was always Christian’s big dream to play in the Premier League. That certainly has to do with Christian’s American background, and as a result we were unable to extend his contract,” Dortmund sporting director Michael Zorc said in a statement. “Christian Pulisic is a perfect player in terms of his character.”

The move is not without criticism. Some are attacking the American soccer system, pointing to how Pulisic’s $73 million transfer far outweighs the next largest one of $22.4 million for John Brooks in 2017. Though there’s been a recent emergence of American talent, the national team failed to qualify for the 2018 FIFA World Cup and the hiring of Gregg Berhalter has been described as “turgid, poorly organized, and only ever focused on one candidate.” Pulisic’s youth clubs will also not receive any of the transfer funds. Traditionally, European clubs who’ve developed players receive up to 5% when that player is sold overseas. However, the US does not participate in FIFA’s solidarity payment system. The transfer indicates that US talent can play at the highest levels. It does not continue to build on that success the way European countries often do.