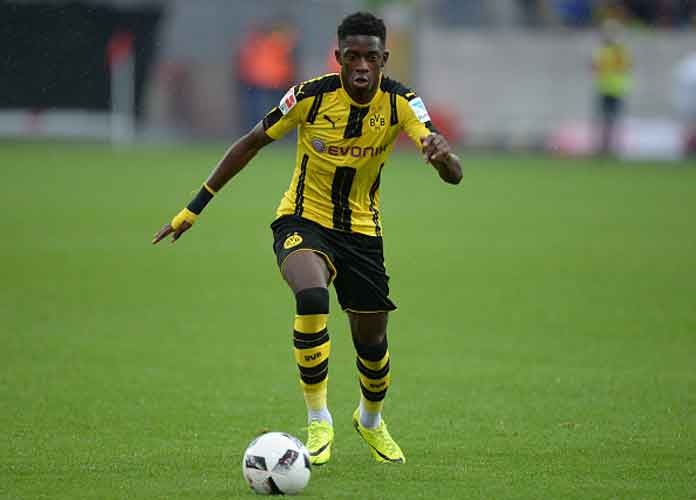 Barcelona have finally had their 100 million euro ($117 million) bid for Borussia Dortmund attacking midfielder Ousmane Dembele accepted, although the Bundesliga club has demanded one stipulation as part of the deal.

Dortmund is requesting 30 million euros ($35 million) in add-ons for the 20-year-old French player ‘subject to his performances,’ according to several reports including ones from Sport, The Sun, and Mirror. Per Sport, the German club requested Barcelona pay the full 100 million euro transfer fee for Dembele up front.

Barcelona have been desperately seeking a replacement for Neymar after the Brazilian forward completed a world-record 222 million euro ($260 million) transfer to Paris Saint-Germain. The move also comes after Liverpool midfielder Philippe Coutinho requested a transfer to Camp Nou on Friday, despite manager Jurgen Klopp rejecting Barcelona’s offer after repeatedly insisting his club does not intend to sell the Brazilian star or any other players.

Dortmund, meanwhile, have suspended Dembele indefinitely after the French star missed training and was also involved in a scuffle during practice two weeks ago.

“Borussia Dortmund has held talks with the Catalan football club FC Barcelona regarding the possible transfer of the BVB player Ousmane Dembele to FC Barcelona,” a statement from the German club read.

“During this meeting, the representatives of FC Barcelona submitted a bid which did not match the player’s extraordinary footballing ability or value to the club, nor the present economic market situation of the European transfer market. BVB therefore rejected this offer.”

Without Neymar, Barcelona suffered a crushing 3-1 home loss to Real Madrid in Sunday’s Supercopa first-leg game. On Monday, the Catalan club confirmed it had signed Brazilian midfielder Paulinho from Chinese team Guangzhou Evergrande for 40 million euros ($47 million). Paulinho spent the last two years in the Chinese Super League and before that played for Tottenham for two seasons.

Barcelona will visit Real Madrid for the second -leg Supercopa game on Wednesday, and then host Real Betis on Sunday for their La Liga season opener.