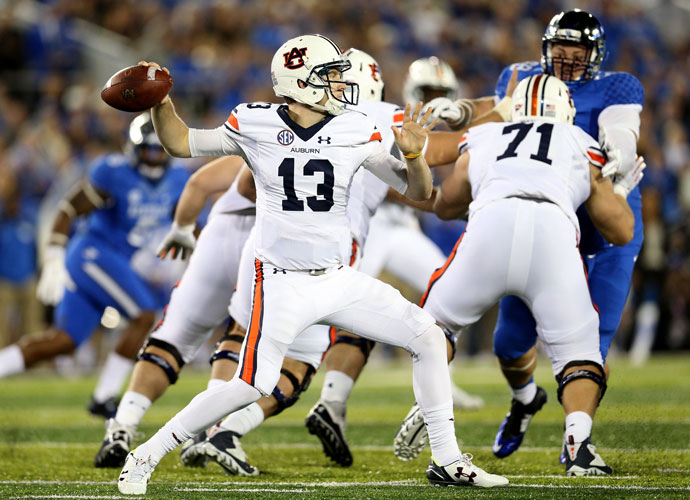 Caption:LEXINGTON, KY - OCTOBER 15: Sean White #13 of the Auburn Tigers throws a pass against the Kentucky Wildcats at Commonwealth Stadium on October 15, 2015 in Lexington, Kentucky. (Photo by Andy Lyons/Getty Images)

The Auburn University Tigers defeated the University of Kentucky Wildcats in a close 30-27 football game on Thursday night in Lexington, Ky. Although the game was close throughout, the Tigers were in control for the majority of the game after gaining an early lead of 14-7 in the first quarter. This was a crucial win for the Tigers, who achieved their first SEC victory in three tries. They will attempt to beat the Arkansas Razorbacks next week.

Auburn Quarterback Sean White displayed a strong game with 17 pass completions out of 27 for a total of 255 air yards. Wide Receiver Ricardo Louis obtained a total of 154 receiving yards. The team’s running game was also very strong, with 152 total rushing yards, 92 of which came from RB Peyton Barber.

On the defensive side, Kentucky quarterback Patrick Towles threw for a total of 359 yards, even though he was unable to complete for a single passing touchdown. Early in the second quarter, Auburn DB Carlton Davis intercepted Towles in the end zone in one of the biggest plays of the game.

The Wildcats’ Garrett Johnson also completed major receptions against Auburn’s defense, with nine catches for 160 total yards. Kentucky’s Stanley Williams also stunned Auburn’s defense with a 60-yard run in the first quarter, although Auburn’s rush defense was strong for the remainder of the game. Williams ended up with 113 yards on the ground, and the Wildcats finished with 138 rushing yards on 33 attempts.

Read more about:
Auburn Tigers Kentucky Wildcats NCAA Football
Listen to the uInterview Podcast!
Get the most-revealing celebrity conversations with the uInterview podcast!