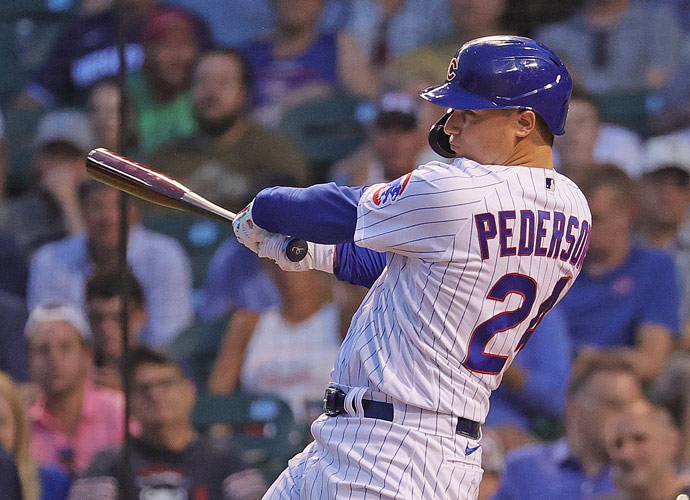 CHICAGO, ILLINOIS - JULY 06: Joc Pederson #24 of the Chicago Cubs hits a run scoring double in the 3rd inning against the Philadelphia Phillies at Wrigley Field on July 06, 2021 in Chicago, Illinois. (Photo by Jonathan Daniel/Getty Images)

The #Cubs today acquired minor league 1B Bryce Ball from the Braves for OF Joc Pederson. pic.twitter.com/cy3W5dqWXn

The trade is a tell-tale sign for both teams and signals each franchise’s planned direction. The Cubs are officially sellers as we inch closer to the July 30 trade deadline. The Cubs have lost 19 of their last 25 games to fall out of the NL Central race. Chicago held on to hopes of remaining competitive, but their current 11-game losing streak dashed any dreams of a potential playoff berth.

Another reason Chicago is selling is that they have many soon-to-be free agents on their roster. Superstar trio Kris Bryant, Javier Báez and Anthony Rizzo are among those who will become free agents after this season. Kyle Davies and Craig Kimbrel are also likely to be moved from the team. Chicago will look to hammer out a contract extension for Baez and Rizzo. If that fails, the organization may elect to look for a trade partner.

while Kris Bryant, Craig Kimbrel and other Cubs are on the block, there are signs the Cubs will try to lock up Javier Baez and Anthony Rizzo before talking trades for them @MLBNetwork

The move bolsters the Braves’ push to make the playoffs. Entering the second half of the season, the Braves are only four games behind the first-place New York Mets in the National League East and just a game under .500. However, a few significant injuries have hampered their playoff hopes. Superstar Ronald Acuna Jr. will miss the rest of the season after tearing his ACL recently. Pederson will be a welcomed addition to the outfield in the wake of Acuna’s injury.