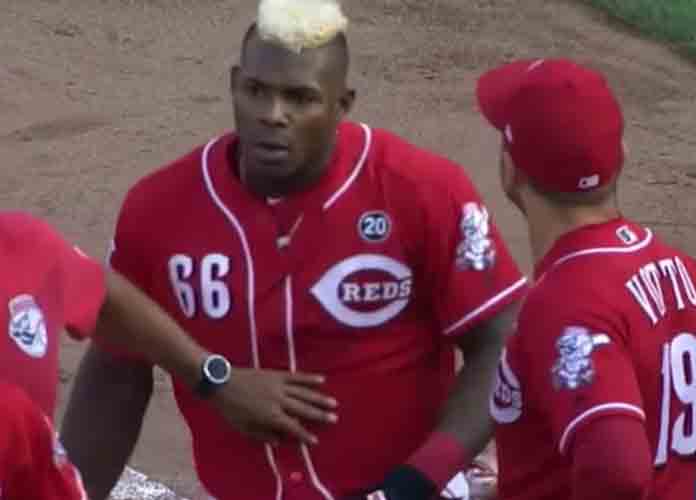 Yasiel Puig with the Reds 2019

Yasiel Puig certainly offered a memorable curtain call as he concluded his half–season stint with the Cincinnati Reds Tuesday night.

Almost at the exact moment the Reds agreed with the Cleveland Indians and San Diego Padres to complete a three-team deal to ultimately ship Puig and his services to Cleveland, the outfielder poured some gasoline onto a game already on fire with arguments and fighting between the Reds and their opponents, the Pittsburgh Pirates.

To kick off the hostility, Pirates pitcher Keone Kela threw a pitch up high and tight at Derek Dietrich during the seventh inning. In response, Reds first basemen Joey Votto exchanged some unfriendly words with both the Pittsburgh bench Kela himself, before the meeting restraints from the umpiring crew.

Joey Votto just walked over to the Pirates dugout and was yelling something, I believe at Keone Kela.

An inning later, the Reds endured not one but two ejections. Umpire Larry Vanover first tossed Reds manager David Bell after arguing against a call before next throwing out pitcher Jared Hughes, who threw at and hit Sterling Marte to continue the foul play between the opposing clubs.

David Bell has been ejected from the game.#BornToBaseball | #Reds pic.twitter.com/VI3a4hZCiC

Coming in to replace Hughes, pitcher Amir Garrett basically boiled over, responding to chirps coming from the Pittsburgh dugout and racing towards a sea of black jerseys, throwing punches and igniting an all–out brawl. Puig quickly rushed in, throwing some punches before then prolonging the mess even further as he repeatedly attempted to attack more Pirates players.

The Reds’ and Pirates’ benches have cleared. pic.twitter.com/za8hYc0zuX

Puig expectedly joined the list of ejectees following his involvement. Upon his return to the clubhouse, however, Puig learned the news detailing the exchange in play to send him to Cleveland.

To add into the mayhem, Bell even returned to the field to participate in the fight. Bell now awaits what will likely be a massive suspension for his antics following the event.

David Bell, as a field manager, is charged with the duty of de-escalating things in a situation like that. He did the opposite and that was after he was ejected.
If he doesn’t get 20 games, Manfred is a total coward.

Bell threw the blame back in Pittsburgh’s direction however, as he stated after the game, “They’re able to get away with it, they celebrate it, they support it, they clearly allow it. I don’t know if they teach it, but they allow it. It’s dangerous. I mean, you can go on and on about so many things wrong about it, and at some point it’s bigger than the game of baseball, and it’s just too bad that nothing’s done about it.”

The Pirates eventually ended the chaos with an  11–4 victory.