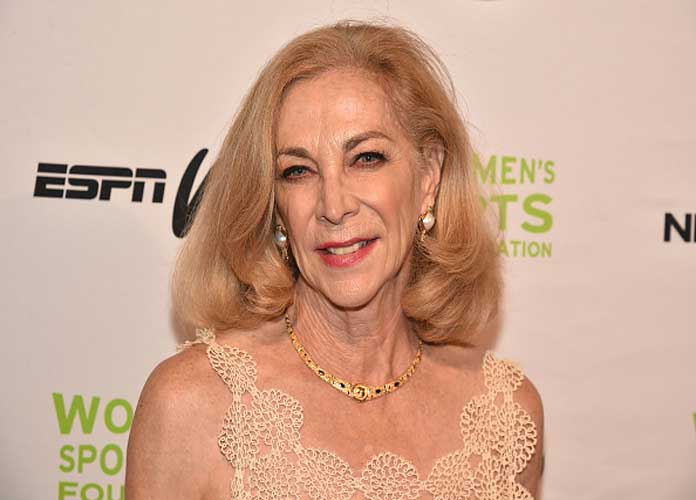 In 1967, a 20-year-old journalism student from Syracuse University named Kathrine Switzer made history by becoming the first woman to officially run the Boston Marathon.

On Monday, Switzer, now 70, crossed the finish line of that same 26.2-mile race wearing the same bib number (261) an official attempted to tear off her clothing in the marathon fifty years ago.

HISTORY MADE!
50 years ago, Kathrine Switzer was the first woman to officially run #BostonMarathon Today she did it again. Amazing.#wbz pic.twitter.com/mUzhTKBOe2

The first time Switzer ran the Boston Marathon, she finished in 4 hours 20 minutes. That year (1967), she registered for the male-only race using her initials, “K.V. Switzer,” to mask her gender. This year, it took her only slightly longer to complete the race: 4:44:31.

“The marathon was a man’s race in those days; women were considered too fragile to run it,” she wrote in an essay for The New York Times 10 years ago. “But I had trained hard and was confident of my strength. Still, it took a body block from my boyfriend to knock the official off the course.”

Even Switzer’s coach at Syracuse — where she trained with the men’s cross-country team — told her the distance was too long for “fragile women.”

“No dame ever ran the Boston Marathon!” coach Arnie Briggs told her, according to her memoir, ‘Marathon Woman.’ But if she could run the distance in practice he promised to take her to Boston.

When Switzer finished the 26-mile trial, Briggs encouraged her to officially sign up.

The Boston Athletic Association is now retiring the number Switzer used for both her races; no runner will ever wear that number on a bib for that particular marathon ever again. Swizter said another reason she used her initials to register for the Boston race was because she was tired of seeing her first name misspelled on her birth certificate and having to correct the mistake. Switzer also mentioned, however, that she wanted to become a writer, and thus thought using her initials appeared like a “cool, writerly” thing to do, just as many other famous authors like J.D. Salinger, E.E. Cummings and J.K. Rowling have done.

Women were officially allowed to participate in the Boston Marathon in 1972. Today, more than half of marathon runners in the United States are women.

“In 1967, few would have believed that marathon running would someday attract millions of women, become a glamour event in the Olympics and on the streets of major cities, help transform views of women’s physical ability and help redefine their economic roles in traditional cultures,” Switzer wrote in her Times article. “We learned that women are not deficient in endurance and stamina, and that running requires no fancy facilities or equipment. Women’s marathoning has created a global legacy.”

Throughout her life, Switzer has competed in more than 30 marathons, winning New York’s in 1974 in 3:07:29, and has worked as a television commentator. She is also the founder of 261 Fearless, a non-profit running club for women. Swizer wore the 261 bib on Monday to raise money for charity.

When asked why she refused to drop out of the 1967 Boston Marathon despite being stopped, Switzer responded:

“Because I knew if I did that no one would believe women could run distances and deserved to be in the Boston Marathon; they would just think that I was a clown, and that women were barging into events where they had no ability,” she said. “I was serious about my running and I could not let fear stop me.”

Switzer also created the Avon International Running Circuit of women’s-only races in 27 countries, paving the way for the first women’s Olympic marathon in 1984. She became an author and TV commentator for the Olympics, World and National championships before returning to marathons at 64.

She has stated she hopes to also run the New York Marathon this year.