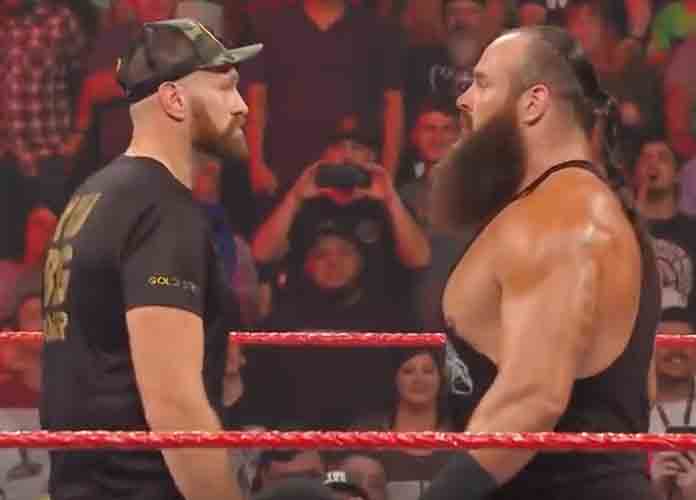 While being escorted away from the venue after a few blows on Friday night, not much could stop the two 6-foot-8 behemoths from getting into it again on Monday Night RAW. All hell broke loose as a massive brawl followed some back-and-forth trash talk.

Fury came into the ring on Monday night demanding an apology from Strowman for disrespecting him during his debut.

“Last week I was here minding my own business, Braun tried to make me look like a fool,” Fury said after his introduction. “I wound up getting chucked out, so tonight I’m here to demand an apology.”

Strowman then entered the ring and fired back.

“Look man, I was messing around and trying to have a little fun with you last Friday on SmackDown,” said Strowman. “That is, until I saw the way you looked at me like you wanted a piece of this.”

He continued: “I don’t know if you heard, but when security was dragging your a— out of the building I was shouting ‘let him go’ because I promise you, the last thing you want is to get in my ring,” Strowman added. “You have no idea what I’m capable of. I will literally eat you for lunch.”

After a few more threats from each fighter, Strowman struck first, lifting Fury into the corner while security attempted to interfere. Fury shook off at least nine security members to get a chance at Strowman and as they fought, even more people came out of the tunnel to stop the incident. The security could not stop Fury or Strowman as they continued to fight in the ring.

Fellow wrestlers did their best to restrain both fighters while Fury kept attempting to break away. Fury was screaming for an official fight between the two men the entire time.

As the tension reaches an all time high in less than a week, expect this rivalry to pick up quick and end in an explosive ring battle sooner rather than later.