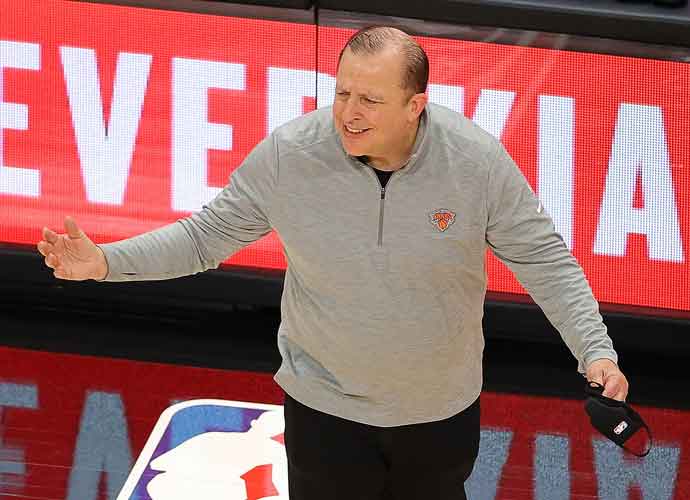 ATLANTA, GEORGIA - JANUARY 04: Head coach Tom Thibodeau of the New York Knicks reacts against the Atlanta Hawks during the second half at State Farm Arena on January 04, 2021 in Atlanta, Georgia. NOTE TO USER: User expressly acknowledges and agrees that, by downloading and or using this photograph, User is consenting to the terms and conditions of the Getty Images License Agreement. (Photo by Kevin C. Cox/Getty Images)

The New York Knicks coach, Tom Thibodeau, benched his starters for the entire fourth quarter of Wednesday’s loss to the Milwaukee Bucks, over issues with the team’s performance; however, he dismissed the idea that they need more time to develop chemistry with each other.

Every one of the starters was at least minus-15 in Wednesday’s game, and only Mitchell Robinson finished with a plus-minus better than minus-20.

And now it is clear to see that New York’s starting lineup is not working. The lineup – Kemba Walker, Evan Fournier, RJ Barrett, Julius Randle and Robinson – has played more minutes than any other five-man unit in the NBA this season. But it has been outscored by 14.4 points per 100 possessions so far this season and has a defensive rating of 119.3 – more than seven points worse than the worst-ranked team defense in the NBA this season.

Thibodeau didn’t play any of them from the 2:01 mark of the third quarter, when he took out Randle in favor of Obi Toppin, until the end of the game, instead opting to ride the all-bench grouping of Derrick Rose, Alec Burks, Immanuel Quickley, Toppin and Taj Gibson.

“Yeah, just they didn’t play well,” Thibodeau commented on his decision to sit the starters. “That’s it. We’ve gotta figure it out. And right now we’re playing well on the road and we’re not playing well at home, which is unusual. So we’ve gotta get that straightened out.”

“We were just searching,” Thibodeau said, explaining his decision to keep the reserves on the court. “Once we got the intensity into the game, got some stops, shared the ball, got some easy scores, got a good rhythm going, I thought the bench played well.”