Tiger Woods Tears Up After Learning Of Kobe Bryant's Death From Caddy - uSports.org 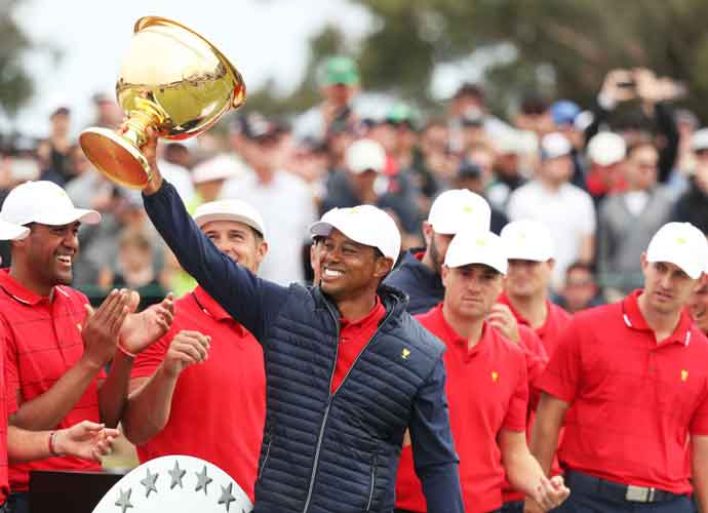 MELBOURNE, AUSTRALIA - DECEMBER 15: Playing Captain Tiger Woods and the United States team celebrate with the cup after they defeated the International team 16-14 during Sunday Singles matches on day four of the 2019 Presidents Cup at Royal Melbourne Golf Course on December 15, 2019 in Melbourne, Australia.

Tiger Woods was playing in the Farmers Insurance Open on Sunday when his caddy Joe LaCava learned of Kobe Bryant’s passing on the ninth hole. He decided to let Woods finish the round before giving him the news.

“It’s one of the most shocking, tragic days that I’ve ever been a part of in a very quick span here,” Woods said in his post match interview.

“I didn’t understand why they were yelling, ‘Do it for Mamba,’ on the back nine,” Woods said. “People yell things all the time, so I was just plodding along, doing my own thing. Then when Joey told me that here…. It’s unbelievable, the reality that he’s no longer with us. LeBron [James] breaks his [Bryant’s scoring] record, and he passes today. I grew up a die-hard Laker fan, always have been my entire life. That’s all I remember, and he was part of the most historic franchise in all of the NBA.”

Woods then recalled Bryant’s impact as an all-time NBA great.

“What made him so impressive is that he was dominant on the offensive side … We all know that,” Woods said. “But he would lock up on D. He played their best guard and shut ’em down for all 48 minutes. That’s what made him so special — he played both ends of the court. There are maybe two guys, three guys in the entire NBA history that you can say that, that would do that. He was up for that challenge. And one of the more impressive things that I’ve ever witnessed is when he ruptured his Achilles, and he went to the foul line, made his shots. Ultimate toughness, ultimate competitor.”

Woods and Bryant had a close relationship and their bond included how they approached a big game or event.

“We really connected more on the mental side of it, the prep, how much it takes to be prepared,” Woods told ESPN. “For me, I don’t have to react like he does, we can take our time, but you’ve still got to pay attention to the details, and that’s what he did better than probably any other player in NBA history. He paid attention to the details, the little things. The amount of hours he spent in the gym in the offseason and during the summers to work on shots and do all the different things, it looked like it came natural to him on the court during game time, but he spent more hours looking at film and trying to figure out what’s the best way to become better. That’s where he and I really connected because we’re very similar. He came into the league, and I turned pro [1996] right around the same time, and we had our 20-year run together. It’s shocking.”