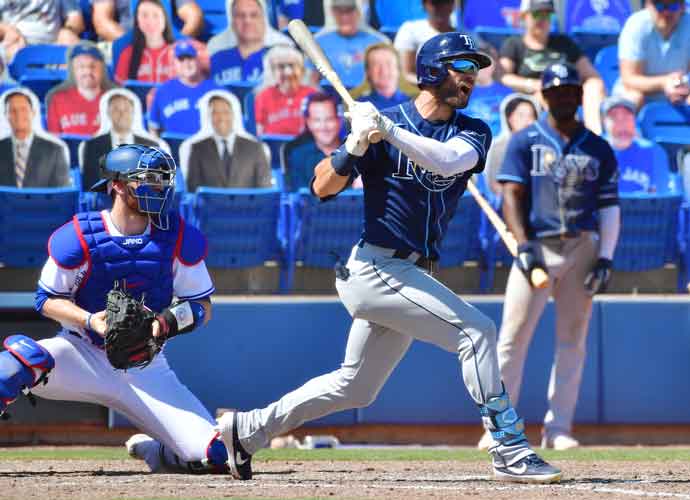 ST PETERSBURG, FLORIDA - MAY 24: Kevin Kiermaier #39 of the Tampa Bay Rays reacts to striking out in the 10th inning against the Toronto Blue Jays at Tropicana Field on May 24, 2021 in St Petersburg, Florida. (Photo by Julio Aguilar/Getty Images)

Kevin Kiermaier, Tampa Bay Rays center fielder, has been dealing with a peculiar injury regarding his left eye. This injury was described by the Associated Press as “left eye irritation stemming from an eyelash.”.

Kiermaier was forced to leave the contest against Saturday with this injury. He did not start in a game against the Blue Jays the next day.

“A couple of minutes in, I was like dang it, I got an eyelash in my eye,” Kiemaier told reporters. “There was an eyelash in there and then we rinsed my eye, and then it disappeared or kind of went into one of these crevices or whatever. Once that happened, everything took a turn for the worse.” Kiermaier said.

“Just one of those weird things” Kiermaier stated. “It seems like this stuff could only happen to me. Got to get through it and roll with the punches I’ll be fine. I assume I’ll be 100% whenever my eye chooses to cooperate.” This is not the first time Kiermaier has suffered an odd injury. His past history includes a hand injury from a slide and an injured wrist during a falling catch.

“Wasn’t happy or proud about (coming out) at all,” Kiermaier added. “These things happen, unfortunately… After being on the (injured list) a couple of times already, this is the last thing I want to deal with. I’ll be fine. But definitely didn’t want to miss any other time other than what I have already, especially with the fluky thing like this,”

Tampa Bay manager Kevin Cash revealed that the organization did not plan to start him in Sunday’s game, but he was an option if needed.

Kiermaier also reported that he was still feeling “a little bit of a scratch or irritation, whatever we’ve got going on in there” but that his condition had improved slightly.