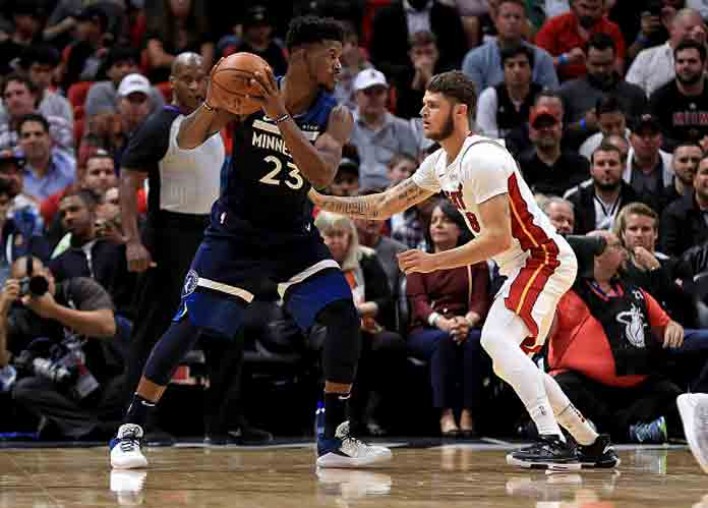 The Houston Rockets (1-3) are reportedly going all in for Minnesota Timberwolves (2-3) four-time All-Star Jimmy Butler with an offer for a whopping four first-round picks. Houston would also have to include some players in the deal to offset Butler’s salary.

The offer falls in line with the NBA’s rule on the maximum number of first-round picks allowable in a deal.

Timberwolves showing “no inclination” that they will move on Rockets offer of 4 firsts for Jimmy Butler, per @ShamsCharania pic.twitter.com/ERG4CAjY3k

The league prohibits teams from transferring first-rounders in back-to-back years and once acquired the furthest out a pick can be moved by a team is seven years.

These picks could give the Timberwolves more long-term draft assets and could also become immediate trade assets to use in other deals.

7-year rule allows a team to trade up to 4 picks between 2019 to 2025. The first has to alternate each year (19, 21, 23 and 25) and cannot have protection unless the pick does not rollover to the following season. Ex: Protected top 14 and doesn’t convey if HOU is in the lottery.

Butler requested a trade in the preseason and expressed his desire to leave Minnesota next summer and become an unrestricted free agent. Butler returned to the team despite his request and has averaged 24.8 points, 5.3 rebounds, 3.5 assists and 3.8 steals in four starts this season.

Wolves owner Glen Taylor made an assurance to Butler that Minnesota would trade him as soon as the organization was satisfied with a deal, but nothing has convinced the team so far.

This deal, however, packs a punch like none of the others before it. It represents the Rockets’ desire to  “sacrifice some long-term roster flexibility” to acquire a legitimate third star to pair with All-NBA guards James Harden and Chris Paul.

Last year, Paul and Harden helped Houston get within a game of toppling the Golden State Warriors in the Western Conference finals, but this season has seen a struggling Rockets team that has now taken off to a 1-3 start.

If these reports are accurate and the deal is accepted, the Houston-Minnesota bid would represent the most first-round picks allowed in a trade offer in NBA history.