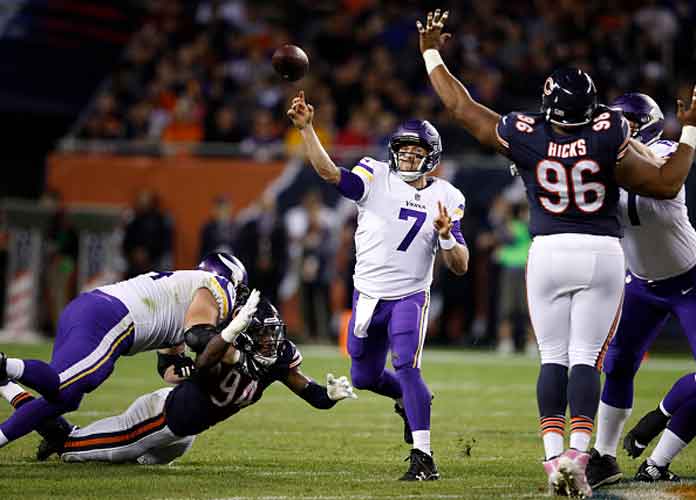 CHICAGO, IL - OCTOBER 09: Quarterback Case Keenum #7 of the Minnesota Vikings passes the football in the second quarter against the Chicago Bears at Soldier Field on October 9, 2017 in Chicago, Illinois. (Photo by Joe Robbins/Getty Images)

The Washington Redskins traded for Case Keenum last week. Keenum will now vie for the starting quarterback role against Colt McCoy. Alex Smith, who the Redskins traded for before the 2018 season, will most likely miss the 2019 season after missing a handful of games this year due to an absolutely gruesome leg injury. For just a sixth-round pick, the Redskins feel confident that they’ve found a stopgap under center. Washington will also now receive a seventh-round pick from the Denver Broncos as part of the deal.

Keenum was originally slated to carry a $21 million cap hit this year. However, he reworked his contract and will be on a one-year deal in Washington. The 31-year-old has a base salary of $18 million this season but only $7 million of it is guaranteed, and this is expected to be split evenly by both teams.

Had the Broncos just cut Keenum, they would’ve had $10 million in “dead money” cap hits. Instead, they’ll pay out only $3.5 million as well as a $500,000 restructuring bonus.

After a season in which he led the Minnesota Vikings to an NFC Championship Game appearance, Keenum signed a two-year, $36 million dollar deal with the Broncos. He was not able to replicate his success in Denver. The team went 6-10, head coach Vance Joseph was fired and Vic Fangio was ultimately brought in to replace him.

The trade shows that neither team seems to have a successful plan for the future. The Redskins are tethering a mid-level team to quarterback play that won’t bring it over the top as it ages. The Broncos shipped off Keenum to bet on Joe Flacco. As the 2019 quarterback class continues to emerge as a viable option to find a starter, the Redskins turned away completely.

“That’s hard; this is new to everybody,” Redskins coach Jay Gruden said of Smith’s absence and the team’s current quarterback situation. “This is an injury that’s tough to overcome, but you also don’t know Alex and what he can do with his mind and what he can overcome. Will he be ready next year or the year after? I don’t know. We’ll play it by ear.”