Ray Rice, Former Ravens Running Back, Speaks About Domestic Violence, Would Like To Play Again - uSports.org 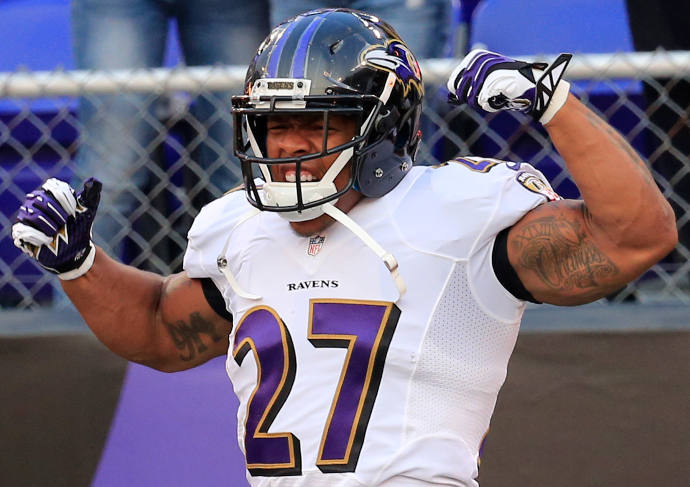 during the first half of an NFL pre-season game at M&T Bank Stadium on August 7, 2014 in Baltimore, Maryland.

Ray Rice, Former Ravens Running Back, Speaks About Domestic Violence, Would Like To Play Again

Former Baltimore Ravens running back Ray Rice appeared on ESPN’s Sportscenter on Tuesday and appeared to have reflected on his actions that made the widely loved ball carrier a team-less hopeful. It seems he wants to hit the field badly. But he claims to have changed his ways.

“I’m not afraid to say right now I’m a rehabilitated man,” Rice said. “Some people will probably never forgive my actions but I think … over time I want to be able to rewrite the script.”

However, while Rice has apologized, there is no doubt a reason as to why he hasn’t been contacted by any of the 31 other teams in the league. One, there is rising talent coming out of the draft and free agency, and two, no team wants the added risk of an already proven domestic violence rap on their roster. Some teams are dealing with suspensions due to drug charges, and they do not want to manage any more personalities, regardless of their previous game day consistency.

Eighteen months ago, Rice was seen on videotape dragging the limp-looking body of his then-fiancee, Janay, out of an Atlantic City casino elevator after punching and knocking her to the ground. After the video surfaced, the Ravens cut Rice from the team, and while he was only supposed to be suspended for two games, he never played the rest of the season.

However, realizing the perception that people have of him because of the incident – mainly his daughter – he has become a voice against domestic violence, saying that, “there’s no room for it in society.”

When asked about the situation Rice mentioned contemplating suicide and second chances. He said,

I did everything wrong at that moment. I was out of my mind not to help her up. To treat her like nothing was the worst thing I could have ever done. I actually felt what it felt like for people to feel like it wasn’t worth living. I felt like that at one point. I know what it felt like to not want to live anymore.

I have a lot of hope and faith that I’ll be able to hang ‘em up the right way. That’s what’s keeping me going, keeping me working. I always preach, one or two bad decisions, your dream can become a nightmare. Well, I had to eat my own words. I truly lived a nightmare. I’m just really hopeful for a second chance.

Prior from his departure from the Ravens, Rice had a career 6180 rushing yards on 1430 attempts, 369 receiving yards, and 37 touchdowns.