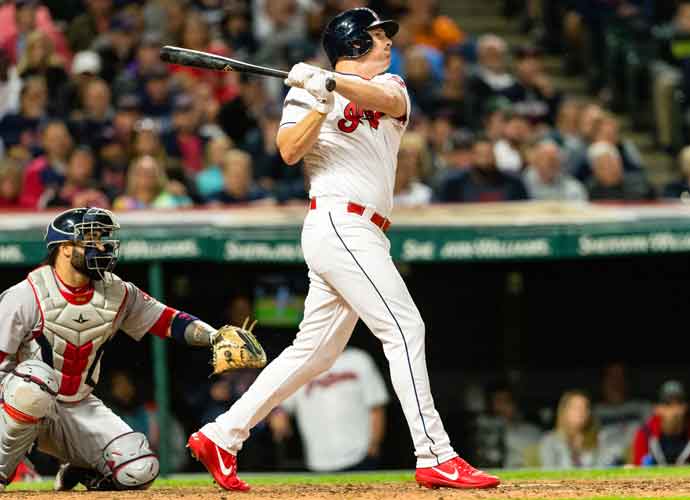 CLEVELAND, OH - AUGUST 24: Jay Bruce #32 of the Cleveland Indians hits a solo home run during the sixth inning against the Boston Red Sox at Progressive Field on August 24, 2017 in Cleveland, Ohio. (Photo by Jason Miller/Getty Images)

On Saturday, ESPN ‘s Jeff Passan reported that the Philadelphia Phillies were close to trading for veteran outfielder Jay Bruce from the Seattle Mariners.

Passon reported that “the sides have talked about Bruce, Seattle is willing to deal him and Philadelphia needs a bench bat. No trade agreed to, however.” On Sunday, the deal became finalized.

A source confirms @JeffPassan: The Phillies are on the verge of acquiring Jay Bruce from Seattle. He'll likely fill a bench role, but he's an option in LF. Phillies will take on most of the contract. He's owed $14 million in 2020.

The Phillies first became interested in acquiring Bruce following the arrest of Phillies outfielder Odubel Herrera on a simple assault charge associated with domestic violence against his girlfriend. After being placed on administrative leave by Major League Baseball, the Phillies found themselves in desperate need for an additional bat — that bat ended up being Bruce.

Bruce, a two-time All-Star and three-time Silver Slugger, was a first-round draft pick by the Cincinnati Reds. After making his Major League debut in 2008, Bruce played the entirety of his career for the Reds until he was acquired in a trade by the New York Mets in August 2016. The 32-year-old appeared in 47 games this season for the Mariners, his first season playing in Seattle, slashed to a line of .212/.283/.785; well below Bruce’s career average slash line of .246/.317/.785. While Bruce has taken an obvious step backward as a hitter, Bruce’s average exit velocity (90.1 mph) and launch angle (24.0) remain strong. The Phillies also will have to pay Bruce the vast majority of the $14 million that he is owed on his contract this season (they can thank  New York Mets for that contract).

Bruce on #Phillies:
“I look forward to going over there and helping the Phillies hopefully win a championship.”

In return for Bruce, the Mariners have acquired third basemen prospect Jake Scheiner and cash. Scheiner is a 23-year-old, right-handed third baseman from San Mateo, California. For the Clearwater Threshers this season, Scheiner has hit to a slash line of .256/.324/.680 in 45 games with two home runs and 20 runs batted in. Scheiner was a fourth-round draft pick by the Phillies in the 2017 MLB Amateur Draft out of the University of Houston.

This is baseball 2019. Nate Pearson throws a 99 mph fastball as an Edgertronic records it. Jake Scheiner takes that 99 the other way for a home run. And Scheiner's bat has a bat sensor. Lot of things you wouldn't see five years ago. pic.twitter.com/QLmeoprmTv