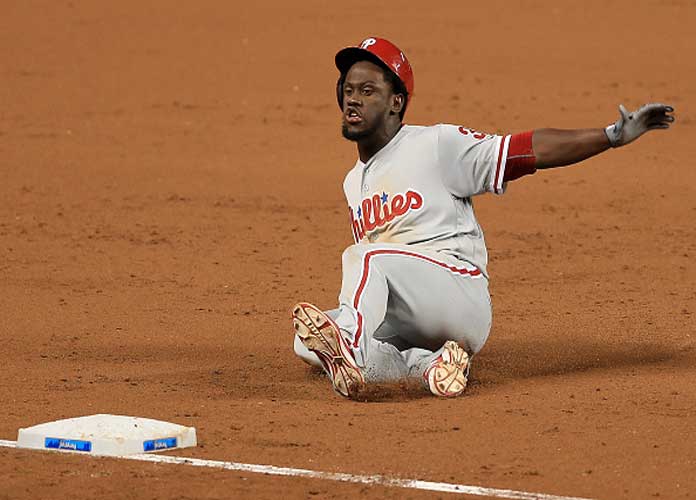 The Philadelphia Phillies rewarded center fielder Odubel Herrera with a five-year contract extension with $30.5 million guaranteed on Thursday, one that could strongly benefit the team.

The Venezuelan, who was set to become a free agent after 2020, instead gets a five-year deal with two club options that could keep him with Philadelphia through 2023. He will be 25 later this month.

Max potential of Herrera’s deal with Phillies is 52 million over seven years; could end up being bargain if he becomes star

Herrera, who hit .297 as a rookie in 2015, improved in his second season, controlling the strike zone better and developing some power.

In the last 20 years, the Phillies have twice reached contract deals with payers who have less than three years of major-league experience: Pat Burrell, in 2003, for $50 million; and Cole Hamels, following the 2008 World Series, for $20.5 million.

Both Burrell and Hamels had more than two years of service time when they re-signed.

Herrera hit a bit of a bump as the All-Star break neared, and his walk rate dropped significantly as the season progressed. He walked 29 times in 108 games from May 1-on.

Philadelphia selected Herrera eighth overall in the 2014 Rule 5 draft. Herrera, then a second baseman with the Texas Rangers’ farm system, was coming off a season in which he hit .321 at Double A and then .372 in the Venezuelan Winter League.

Earlier this year, Herrera was a finalist in Gold Glove voting.

MIAMI, FL – SEPTEMBER 06: Odubel Herrera #37 of the Philadelphia Phillies slides into third on a triple during a game against the Miami Marlins at Marlins Park on September 6, 2016 in Miami, Florida. (Photo by Mike Ehrmann/Getty Images)