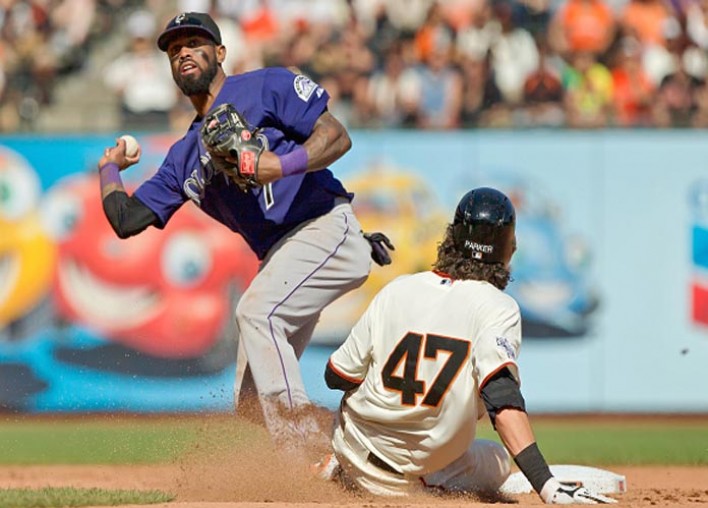 Caption:SAN FRANCISCO, CA - OCTOBER 4: Shortstop Jose Reyes #7 of the Colorado Rockies catches Jarrett Parker #47 of the San Francisco Giants in a double play against Mac Williamson in the eighth inning at AT&T Park on October 4, 2015 in San Francisco, California, during the final day of the regular season. The Rockies won 7-3. (Photo by Brian Bahr/Getty Images)

When Jose Reyes strolled to the plate for his first at-bat since returning to the New York Mets Tuesday, that familiar sound was there to greet him.

For 11 years, fans in Queens cheered Reyes loudly at his plate appearances, often chanting his name in triplicate.
It was that same sound he heard ringing through the stands at Citi Field Tuesday, an ovation fit for a conquering hero.

But this is not the same player Mets fans fell in love with 15 years ago.

This version  is 33 years old, desperate to recapture the glory he lost with age, injury and relocation, desperate to redeem himself after being suspended 52 games for violating MLB’s domestic violence policy.

New York’s fans are equally desperate to find the player they once knew within this older, higher-mileage and excess baggage edition.

Newsflash Mets fans, you will never find what you’re looking for.

This Jose Bernabe Reyes is a grizzled veteran looking to fill a role, not a star set to carry a team.

Reyes is striving to become a Carlos Beltran replica: well-beyond his prime, but proves his worth year-in, year-out by producing.

There is no better place for him to start over than where it all began.

But this incarnation of the Dominican-born infielder, who the Mets signed two months and five days after his 16th birthday back in 1999, will be watered down to say the least.

Three times he finished with a batting average over .300 while in New York, but he hasn’t reached that benchmark since leaving the team in 2012.

His strikeouts are up and his power is down. His on base percentage, which used to consistently hover around .350, has plummeted toward .300.

Now, he returns to replace the player who helped him rebuild a fledgling franchise.

With David Wright out indefinitely due to back surgery, Reyes returns as a mercenary, hired to plug the hole left vacant by his former running mate.

Which means we won’t see Reyes diving into the hole between short and third to backhand a sharp ground ball, before uncoiling his hose to get the runner at first.

The left side will more closely resemble two Asdrubal Cabrera’s: sure-handed fielders whose range is limited, can hit, but won’t win a batting title and have power but won’t be clubbing 20 and driving in 100.

It’s not the superstar we once knew. The one who could change the outcome of a game in his first at-bat.

It will be bad before it gets good and it will never again be great.

Reyes barely swung a bat during his suspension and his lack of a preseason has shown. He went 0-for-4 in his Mets debut do-over and he was 6-for-34 with Brooklyn and Binghamton before being called up to the Bigs.

The machine won’t be running full-tilt until August most likely, and even then, parts are bound to breakdown.

Reyes had injury issues in his mid-20s, what do you expect from his body in his early-to-mid-30s?

At least two trips to the disabled list for soft-tissue injuries can be anticipated.

Sorry to burst your bubble Mets fans, but this is a different player from the one you once knew. He is not a savior for the franchise, he is no longer a superstar and his image has been forever re-framed.

But here’s the best part, he doesn’t need to be what he once was.

The Mets don’t need a superstar to win the World Series, they need another Asdrubal Cabrera: solid defense and timely hitting with a little pop.

Sure, we will see a few “Reyes runs” hung on the scoreboard, but he doesn’t need to steal 30 bases in the second half to be productive.

If he plays his role, Metropolitans fans will have plenty of reason to say, “Jose, Jose, Jose.”