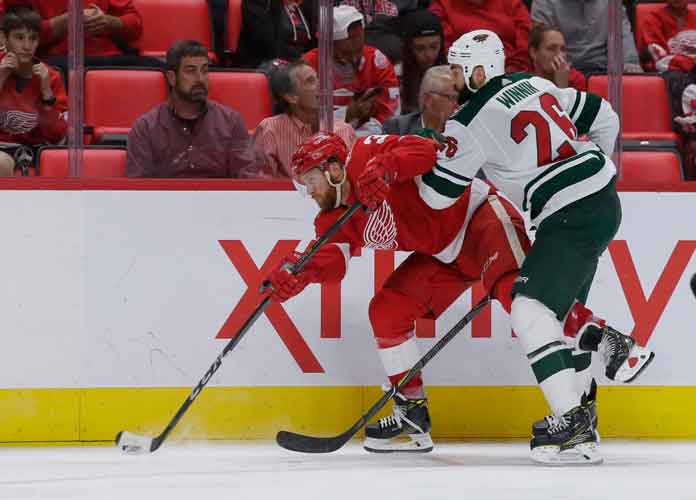 DETROIT, MI - OCTOBER 5: Nick Jensen #3 of the Detroit Red Wings clears the puck under pressure from Daniel Winnik #26 of the Minnesota Wild during the third period at Little Caesars Arena on October 5, 2017 in Detroit, Michigan. The Red Wings defeated the Wild 4-2. (Photo by Duane Burleson/Getty Images)

NHL teams are donating sanitation machines to aid General Motors employees who have been producing medical masks for front line hospital workers in one of the company’s revamped plants in Warren, Michigan, as they attempt to stop the the spread of COVID-19. While the masks were being produced in an efficient manner, the plant was being slowed down by the disinfecting process and the U.S.-based car giant knew they needed help.

“They were trying to get their hands on a sanitizing machine,” Boyer said. “What we use them in the sports industry for is killing the bacteria, and making that wonderful sports odor go away. You put anything in it that touches the skin: skates, shoulder pads, helmets. They’re designed to sanitize an entire bag of hockey equipment in one shot.”

The Red Wings were unable to donate one because their machine was built into the HVAC system inside the locker room, an upgrade the team received at the recently built Little Caesars Arena in 2017. Despite the roadblock, Boyer went a step further and reached out to five equipment managers around the league.

“The machines were just sitting idle in the locker rooms, so it was a no-brainer,” Boyer said. “Our guys are very generous. I could have gotten more. Some were willing to donate it, but they couldn’t get into their rinks.” The Chicago Blackhawks and Philadelphia Flyers stepped up big time and sent their sanitizing machines over right away.

Boyer personally delivered another machine to the factory that he borrowed from Precision Blades in Grosse Pointe, Michigan, and connected GM with the machine manufacturers that are located in Montreal just in case any problems arose. For reference, the machines “are about the size of a suitcase.”

The Flyers and Blackhawks delivery arrived at the GM plant a few days later, much to the delight of GM’s executive director of manufacturing, Rob Portugaise.

“Of course I said to Paul, the minute you need these things back, I’ll get it back to you,” Portugaise told ESPN. “But so far, that hasn’t come up. Hockey has a reputation for this, right? For being close-knit and helping out the community. To be able to witness it firsthand was really exciting. It was all done very quickly. The only thing they asked for was a shipping address.”

GM had bought one cabinet for disinfecting similar to the NHL’s machines “but quickly we learned we would have to get more capacity,” Portugaise claimed. “Each of those units now gives us four times the capacity of the cabinets.”

The NHL’s donation will help GM make up to three million masks a month, the corporation said. Currently, GM is focusing on getting the masks to the local Michigan area because of the high demand, but hopes to supply other states as their capacity grows.

Portugaise later added that he’s a huge hockey fan and praised the league for helping out during a dire situation. “You hear stories,” said Portugaise. “But this just gave me more appreciation for the hockey community.”